“The test of a first rate intelligence is the ability to hold two opposed ideas in the mind at the same time, and still retain the ability to function.” – F. Scott Fitzgerald

You may have trouble believing that the U.S. dollar can crash (as it has been for the past 90+ years) and yet, at the same time, a commodity like oil can go down in price.

Under normal circumstances, you’d be correct to think that a devalued dollar would mean higher-priced oil.

And though the relative price of oil depends somewhat largely on the exchange rate of the U.S. dollar, it’s not the only input for the equation.

The other two big inputs are supply and demand – of course.

And in this country, though many of our cowardly leaders in the White House and Congress may not like it or support it, our supply of unrefined crude oil is going through the roof.

Back during the height of oil prices in 2008, everyone wanted to invest in oil. And many people did just that. The massive investment didn’t just line the pockets of oil company executives, as our President might suggest.

It went into the development of the huge shale and oil sands deposits in the American and Canadian Midwest. 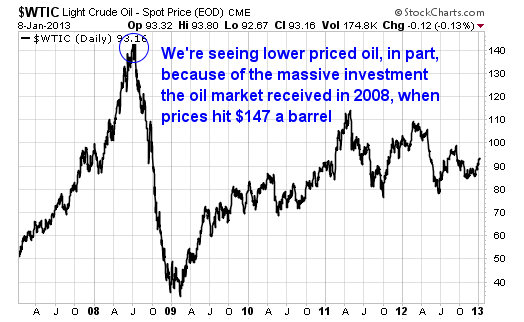 Today, we actually have a glut of oil reaching our refineries and sitting in-ground, waiting to be pumped, piped and refined.

We’ll continue to see lower priced oil until some of the oil glut gets siphoned off by either new pipelines and/or new refining capacity.

This “glut” might sound like bad news for the average oil investor – who likes to see (and frequently waits for) higher priced oil before deploying capital in the sector – but that’s looking at the oil market through the wrong end of the telescope.

Yes, oil prices could drop to $50 (as some analysts now predict) but that price has almost nothing to do with some of the best oil investment opportunities.

My colleague Tyler Laundon pays almost no attention to the price of oil, and instead looks at individual companies on the verge of massive new production.

These companies stand to see their earnings explode regardless of what happens with the price of oil.

One such investment, Africa Oil, shot up 500% in a matter of three months as they reported new drilling results.

My point isn’t to brag for Tyler – just to say that if you only look at an asset price in order to decide where to invest, then you’re missing out on all of the individual opportunities in the sector.

The owners, managers and employees at Africa Oil don’t care about the price of oil in West Texas – or the price of tea in China for that matter. They only cared about finding oil on their property. That kind of focus on individual catalysts is what will make you money in the oil market.

Africa Oil is just the beginning for Tyler and his readers. As he recently wrote, “You've no doubt read the headlines that oil production in America is surging – so much so that the U.S. may surpass Saudi Arabia as the world's largest oil producer by 2020. And that energy independence might be attainable within 10-20 years. Natural gas production is also helping tremendously.

This is a mega-trend, and while we have some nice oil exposure we don't yet have a lot of pure-play U.S. oil production in the portfolio.”

To round out his coverage of this mega-trend, Tyler recently added an American oil stock to Pay Dirt, his excellent research service dedicated to commodity investing.