At the beginning of 2012 I put together a watch list of 25 of my favorite emerging gold and silver miners from around the world – Canada, Australia, Latin America, the U.S., Africa … the best of the best, in my opinion. I screened more than 200 companies to come up with this list, which primarily featured companies with market capitalizations below $300 million.

At a time when mining shares were exasperatingly weak, especially given the relative outperformance of gold, my thesis was simple: At some point mining stocks would turn and the very smallest end of the market was where the biggest profits would be made. The question of course was when (not if) this would happen.

One signal would be improvement in the slightly larger juniors (or mid-tier producers) – those with market caps between $500 million and $2 billion. A recovery in an ETF such as the Junior Gold Miners ETF (NYSE:GDXJ) would be one way to play this, while giving some access to the very small end of the market. The following chart shows that since the beginning of 2012 GDXJ is down, although it looks like it found a bottom in mid-2012. 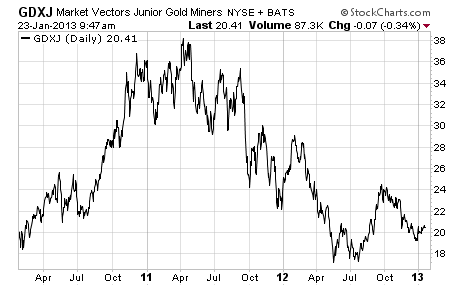 On May 17, 2012 I wrote that another signal would be acquisitions, stating that established miners would likely find cheap juniors to be the most efficient way to add reserves and near-term production.

So how has my watch list of “true” juniors performed since the beginning of 2012? Horribly. Only four of the 25 companies are in the black since I started tracking them. The average decrease in share price is 27%.

But the track record of acquisitions just on this relatively small list suggests it's worth looking at gold miners again.

Three of the companies on the list have recently been involved in acquisition talks. The first, Argonaut Gold (AR.TO) followed through on its purchase of the second, Prodigy Gold (PDG.V). When the offer was announced, Prodigy rose by nearly 40%, and since I started tracking them these stocks are now up 4.5% and 28%, respectively (note that since the acquisition was completed, Prodigy Gold has ceased to exist).

A company that I had followed for a while (but wasn't on my watch list), Orko Silver (OK.V), was recently purchased by First Majestic (NYSE:AG). That offer represented a 69% premium on shares of Orko Silver.

The interesting thing about these acquisitions is that none are for a big premium over any of the respective stocks' 2012 highs. In fact, only Prodigy Gold was purchased for more than its 2012 high. The rest would have been considered disappointing takeovers if you purchased shares in early 2012. So clearly it's been wise to hold off on purchasing these little guys.

But right now, using a simple average of the takeover premiums I listed above, it appears that there is around 30% – 50% upside to the “best of the best” junior gold and silver miners out there. Yet shares of many of these companies continue to decline, especially at the very small end of the market where project financing without shareholder dilution is next to impossible.

In sharp contrast, performance of more established producers, like those in the GDXJ, is actually headed in the right direction. These stocks are currently outperforming the smaller miners that are on my watch list. When the GDXJ is in full recovery mode, buying the true juniors will be a good move. But that hasn't happened yet.

This tells me there's no reason to go fishing for the tiny gold and silver companies out there just yet. The GDXJ is the way to go for a broad-based recovery in the sweet spot of the mining sector. It's simple and cheap. And it protects investors from any bad news that could wreck a single stock overnight.

Once we see the GDXJ take off, we'll know it's time to get back into the really small juniors. Until then, I'll just keep monitoring my watch list and recommending investors buy the GDXJ.

Additional Reading: For investors interested in learning more about the GDXJ ETF, as well as five additional ETFs for resource investors, we're offering a very low, introductory rate to Pay Dirt. You can receive the complete ETF report and trial subscription to Pay Dirt by clicking here.