The two-month drop in oil prices appears to be over.

The price for West Texas Intermediate Crude declined 26% in May and June. But the drop in oil prices had a fundamental reason.

In February, oil increased from $95 to $110 in just three weeks. As a result, demand dropped.

At times, oil is its own worst enemy. Typically oil prices will rise as economies grow. However, as the price rises, it becomes unaffordable, which leads to a decrease in economic activity – thus a decrease in demand for oil.

Since oil wells cannot immediately curtail production, inventories build. The increase in supply (combined with the consumer’s decrease in demand) flushes oil prices down the drain.

In addition to the supply and demand imbalance caused by the February price spike, crude oil also had to overcome the financial calamities in Europe.

So we saw kind of a see-saw swing from momentary highs above $110 to somewhat unsustainable lows below $80.  And now prices are on the upswing again: 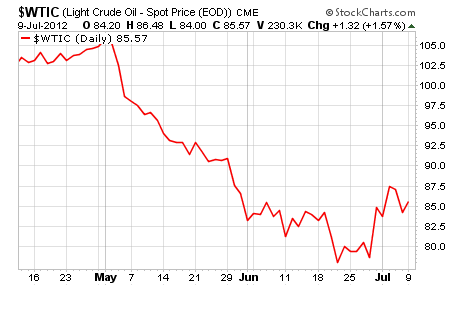 Through globalization, a recession in southern Europe resulted in a worldwide contraction of energy demand. Fortunately, these fluctuations in demand and supply are short term in nature – especially compared to the long-term global supply/demand dynamics.

The average recession lasts nearly three quarters and the decrease in energy demand during that time can cause the price of oil to tank. However, long-term commodity investors should be encouraged that demand recovers far quicker than supply.

The fact that oil supplies are limited in the long term will eventually lead to higher prices so long as demand doesn’t vanish. This appears unlikely anytime soon since most economies are still heavily dependent on oil. But oil wells don’t have to dry out before oil prices rocket higher.

While it will take many years for oil supply to come anywhere close to depletion, the cheap stuff is already gone …

There are very few places in the world where crude can be extracted for less than $20 per barrel.

More reserves are being found each day, but it may cost $50 to $70 just to remove the oil from its bed. At oil sands properties in Canada, it may cost $100 or more to pump a barrel of oil from the ground.

When oil is trading at over $100 a barrel, these sites can be quite profitable. However, drillers will stop pumping oil when prices fall below extraction breakeven points.

The recessions of the past have always dragged oil prices lower. But the recession lows were never seen again, and higher oil prices followed for many years.

Since so many economies are dependent on oil and because the price to extract oil from the ground is increasing, oil prices will always be moving higher in the long term.

That’s why now is a perfect time to add long-term exposure to oil to your portfolio.