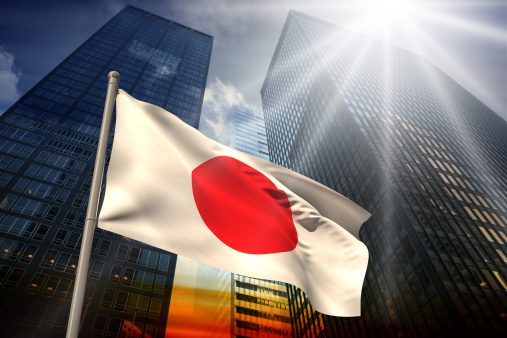 The sigh of relief coming from Japanese investors was almost palpable after a 15-year wait.

The more representative Topix index in Japan is also at its highest level since 2007. The good news here is that, despite the price rise, the Topix still sells at a discount to the S&P 500. It trades at 15.8 times earnings, versus 18 for the S&P.

There are three primary reasons for the stock market’s Lazarus-like revival in the Land of the Rising Sun:

Japanese companies have long been known for their unfriendliness toward shareholders. But that is now changing. Prime Minister Shinzo Abe’s push for better corporate governance is bearing fruit.

Look for other major names, such as Sony (NYSE: SNE), Canon (NYSE: CAJ) and Kyocera (NYSE: KYO), to also begin listening to what their shareholders are saying.

Reason No. 2: Profits and Dividends Are Rising

SMBC Nikko Securities estimates that profits at 250 large Japanese companies were up 10% in the fiscal year ended March 31. This follows a stunning 66% jump the previous year.

The combination of a weak yen boosting exports and tumbling oil prices benefited the bottom lines of most Japanese companies. In fact, Japan recently recorded its first monthly trade surplus since 2012.

Higher profits means Japanese companies have been able to listen to shareholders and raise their dividends. For the fiscal year ended March 31, total dividends paid by listed companies climbed by about 13% to $79.5 billion, according to Nomura Securities. The average yield now for Japan’s top companies is 1.36%, well above Japanese 10-year government bond yields of 0.3%. 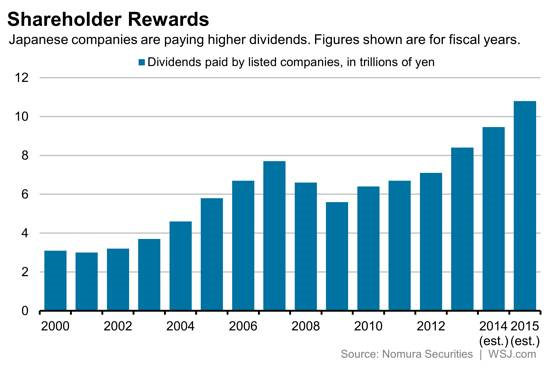 The central bank – the Bank of Japan – is buying stock-based exchange-traded funds directly. In its version of quantitative easing, Bank of Japan Governor Haruhiko Kuroda calls this a “different dimension” of monetary easing.

In addition, Japan’s massive $1.1 trillion Government Pension Investment Fund boosted its allocation to Japanese stocks and is shifting some of its funds out of low-yielding Japanese government bonds.

Of course, it’s not all smooth sailing for Japanese stocks.

But offsetting the bad international outlook is good news on the domestic front.

First, the government pushed back its proposed sales tax increase from October 2015 to April 2017. More importantly, Toyota Motor Corp. (NYSE: TM) agreed in March to raise wages for Japanese workers by 3.2% starting in April. This is the largest pay raise by Toyota in 13 years.

Other larger companies including Honda (NYSE: HMC), Nissan (OTC: NSANY), Hitachi (OTC: HTHIY), Panasonic (OTC: PCRFY) and Toshiba (OTC: TOSYY) have all given their employees a substantial raise in 2015.

The hope now is that a wide swath of smaller Japanese companies will follow suit. If that happens, it will boost the long-moribund Japanese domestic economy.

Investors have been here before with Japan. Its stock market has seen many false dawns over the past few decades. The real difference I see this time is that there is genuine reform going on in Japanese corporations.

Japanese corporate reform is literally decades overdue and should reap benefits for holders of exchange-traded funds focused on Japan. A good example is the iShares MSCI Japan ETF (NYSEArca: EWJ), which is up 11.5% year-to-date.

Another excellent choice is the WisdomTree Japan SmallCap Dividend ETF (NYSEArca: DFJ). It is up 11.6% year-to-date, despite many of Abe’s reforms having yet to filter down to Japan’s smaller companies – a fact that bodes well for its future growth prospects.

Increasing dividends 11 quarters in a row!

Not only that, this company is expected to continue increasing them in the months and years ahead. Even better: By taking advantage of it you can slash your taxes down to the absolute bone—and it’s all perfectly legal! If you’re looking to supercharge your income growth now, look no further. Click here for all the details.