Therefore, timing matters. But it doesn't have to be perfect.

Dividend-growth investing has been in favor for the past couple years, thus many of these issues have trended higher. To take advantage of that trend, I added two dividend growers – Altria (NYSE: MO) and McCormick & Co. (NYSE: MKC) – to the High Yield Wealth portfolio last year.

I see a trend that offers similar investment potential. What's more, I see this trend being especially favorable to one income investment. This investment already offers exceptional yield, but I think it also offers substantiation price-appreciation potential.

For the past two years, natural gas prices have been trending mostly lower. In fact, they’ve trended far below what has historically been considered a market bottom: $4 per million BTUs. 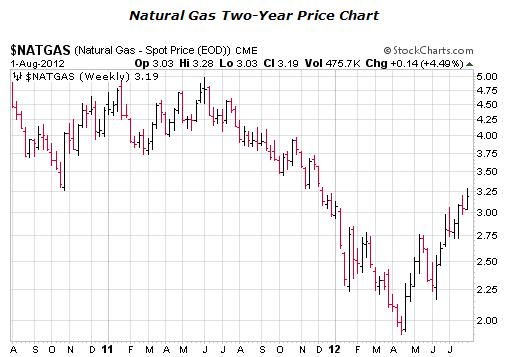 Natural gas prices have been recovering and trending higher since April, and I see this trend sustaining itself for a number of reasons that center mostly on demand:

The rising natural gas price trend should prove to be especially beneficial to natural gas storage companies. TD Securities already reports that natural gas-in-storage will hit a record high for the second consecutive year this year.

The outlook is for 4.1 trillion cubic square of natural gas to be in storage by the end of October. That's stretching total capacity, which is at around 4.5 trillion square feet.

This is good news for PAA Natural Gas Storage LP (NYSE: PNG), one of the largest natural-gas storage providers in the United States. The company's largest facilities are located along the Gulf of Mexico in Mississippi and Louisiana, which is developing into the hub of LNG exports. That means growing demand for storage in this region is unlikely to abate anytime soon.

Today, though, the market remains a little soft. PAA is still under contract for storage signed at lower prices. These contracts have held earnings and PAA's share price down.

Nonetheless, PAA has been a steady cash generator and income distributor over the years. It pays $1.44 annually, which produces a 7.9% yield. Since 2010, that payout has been increased four times. Despite low storage prices, PAA is still able to generate significant cash for its investors.

But as natural gas prices continue to hold more elevated (and more normal) levels, PAA should be able to renew more of its storage contracts on more favorable terms. This, I believe, will drive cash flow and payouts to investors in coming years. This should also help push the current share price – now around $18 per share – higher.

Here's one additional consideration: It's always better to invest into a trend nearer to its base than to its peak. It's simply a better value. Natural gas prices and PAA shares are closer to their base than their peak.