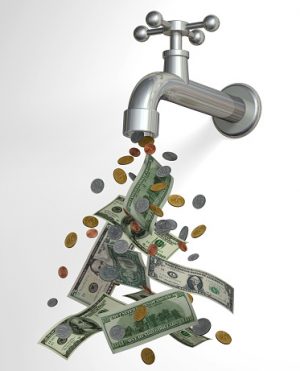 The upstart Ivy League graduate and aspiring U.S. president would oversee the writing of a bill that ensures every American over age 18 receives $1,000 monthly.

Rich or poor, it makes no difference: Warren Buffett and downtown panhandler alike would receive $1,000 in monthly mandated income.

Yang refers to his federally funded payments as “freedom dividends.” He asserts that they will free Americans “to pay their bills, educate themselves, start businesses, be more creative, stay healthy, relocate for work, spend time with their children, take care of loved ones, and have a real stake in the future.”

Wow, this sounds like a proposition found only in utopia . . . and, unfortunately, it is.

Yang’s freedom dividends, like utopia, are an unsustainable fantasy.

The federal government runs a $700 billion annual budget deficit as it is. The U.S. national debt already tops a vertigo-inducing $22 trillion.

As for Yang’s economic projections, they, too, are a fantasy.

The reality is that economics can’t measure, it can’t predict. Economics can only explain.

Given the appalling complexity of a modern economy, no economist grounded in reality would accept Yang’s absurdly precise, rosy percentages of projected economic growth.

So, forget about the freedom-dividend fantasy, and let’s get real about your income.

Liberty Checks are legitimate because they are sustainable. They’re not paid by the federal government through taxation, debt, or inflation. They’re paid by U.S. companies creating real value backed by real cash flow in a market economy.

You have an opportunity to collect your first Liberty Check.

A Chicago-based real estate company declared yesterday that it would pay $441 million in Liberty Checks. Individual investors like you can collect a $1,043 Liberty Check (or more).

Anyone can collect. All you need to do is buy the company’s Liberty vouchers (which is easy), wait a couple of weeks, collect your Liberty Check, sell your liberty vouchers for additional profit.

We know from experience.

We’ve exploited 59 Liberty Check opportunities since May 2016.  Investors have been able to realize $1,173 in individual Liberty Checks. These checks have arrived not every month, but every 20 days on average.

The opportunity to collect your first Liberty Check ends next week.