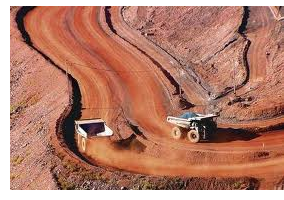 And sometimes the ONLY way you can succeed is by resisting every temptation, abandoning your initial instincts and heading completely away from the well-traveled road.

So instead of telling you about some high-flying gold or silver stock today – on the third and final day of the Prospectors & Developers Association of Canada (PDAC) conference – I'm going to tell you about an opportunity in possibly the most boring and ordinary mining story you're likely to find anywhere.

As I write this, most PDAC attendees are loading up on shares of super-risky micro-cap gold companies. Most of these investors will lose their shirts on these investments. A few of them will grow fabulously wealthy, only to blow their wealth on some other risky venture.

So I was very interested when my colleague and small-cap expert Tyler Laundon suggested I come with him to attend a series of iron ore presentations. This was his pitch:

"Listen, iron ore is the second largest commodity market by volume – only the oil market is bigger.

Over the last three years we've seen a huge run-up in the price of iron ore products. But in 2011 they came off a bit, and iron ore producers saw their stocks tumble.

That's going to change, and there are two companies in particular that are going to benefit. I've been following them for more than 16 months, and they're getting close to being a buy.

Think about it; developing countries like China and India absolutely have to have lock down future supplies of iron ore.  And it has to be relatively good quality. The future development of these countries, not to mention developed nations, depends on good steel.

To lock in supply, they need to find big deposits not already owned by the majors like Rio Tinto. That means we look at the juniors.

We're hearing a lot about a bust – or a soft landing – in China. I can't tell you which it'll be, but I can say with confidence that it would take a near economic collapse for Asia to stop buying iron ore.  And I don't see that happening.

Last month, spot activity in the iron ore market from Asia was up over 90% year-over-year. Yes, iron ore purchases out of Asia are a bit lumpy – but that's always the case since the commodity doesn't trade on a major commodities exchange.

What we're looking for are massive iron ore deposits that can support mine production for decades. We want to get into the stocks as they begin production, and hold onto them for the duration."

Tyler was right. Iron ore is boring – no doubt about it – but the Asia story is not going to change enough anytime soon to put a substantive dent in iron demand.

While we dither and worry about the economies, unemployment and stock markets of the west, there's a completely different mantra of worry in the east: that they will not have enough metal to continue building!

Where will they get the metal?

Well, Tyler would kill me if I gave up all of the companies in his watch list.  But one company that caught my eye in the iron ore group is Labrador Iron Mines (TSX: LIM).

They're a Canadian company that JUST began production and they're expecting to grow production by leaps and bounds over the next year.  That's exactly the type of company that Tyler looks for in the gold and silver space. The only difference is that we're talking about iron. These "emerging producer" types of mining companies can absolutely skyrocket their earnings and profits even in a down-market as their production numbers and sales vastly outpace any downturn in the underlying metal.

Even better, this company is trading near 52 week lows AND they have zero debt and $20+ million cash on hand. This company is ready to crush it – it's just a question of whether now is the right time to buy.

Tyler and I are leaving Toronto this morning and will be on the road for most of the day, but if you have any questions about iron or any other metal or commodity, please don't hesitate to drop me a line at [email protected].