The monthly jobs reports from the Bureau of Labor Statistics are widely seen as critical indicators of not just the economy’s health, but also when the Federal Reserve will finally increase interest rates. 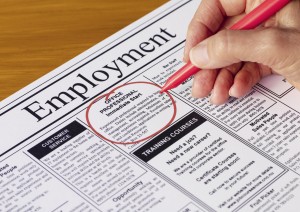 Ever since the federal funds rate was slashed to zero during the depths of the financial crisis, the Fed has kept its foot on the monetary gas pedal, declining to raise rates until the U.S. economy is on firm enough footing to stand on its own legs.

With each passing month, the jobs report is heavily scrutinized for clues as to whether the economy could become self-sufficient enough to handle higher interest rates. Since job creation has been steadily strengthening, economists widely expected the Fed to finally raise interest rates as early as June this year.

The March jobs report, released  April 3, may throw a wrench in this plan. The U.S. created 126,000 nonfarm payroll jobs, which was far below the 245,000 expected on average. This was a very disappointing report, as the economy had averaged 269,000 new jobs each month over the past year. March represented the first time in the last 14 months that the economy created fewer than 200,000 jobs.

Because of this, the Fed and its chairwoman, Janet Yellen, may have enough information to warrant postponing a rate increase until later this year – perhaps September, or even until 2016.

The effects of the March jobs report are difficult to foresee. On one hand, low job creation is obviously bad for the economy. Fewer people obtaining jobs means less money for consumers to spend. Conceivably, this would result in lower economic growth going forward.

On the other hand, a poor jobs report may actually be good for the stock market. Equity investors have become accustomed to the Fed’s helping hand.

Moreover, rising interest rates are generally viewed as a negative for corporate profits. That’s because rising rates result in a higher cost of capital. This has a negative effect on companies that heavily utilize debt, such as utilities and real estate investment trusts (REITs). This discrepancy was on perfect display after the March jobs report was released.

The stock market was closed on April 3 in commemoration of Good Friday. Stock futures plunged immediately following the release of the jobs report. However, once trading resumed on Monday, the Dow reversed its losses and then soared 130 points. This illustrates the tug-of-war currently taking place in the stock market, and the inability of investors to form a consensus on how to view a disappointing jobs report.

The mixed signals coming out of the labor market will result in mixed opinions for Fed officials. More dovish members of the Fed are likely to use the March report as reason to delay tighter monetary policy. After all, a separate gauge the Fed uses to determine whether it’s time to raise rates – inflation – is nowhere to be found. Now that commodity prices have plunged, inflation isn’t a concern, which could compel the Fed to hold off on finally raising rates.

However, more hawkish members of the Fed might say that the March report is an aberration, and that the 5.5% unemployment rate is more than enough reason to pull the trigger.

As 2015 proceeds, expect investors to keep their eyes glued to the Fed more closely than ever.

Many other billionaires do it. And so can you. Just by parking in your wealth in this island paradise—the third richest economy in the world. Not only does this country levy no personal, corporate or capital gains taxes, even the U.S. government will look the way when you invest here. All because of a special quark in the tax code. Use it now, and you can start compounding your wealth faster than ever. All it takes is a few minutes.