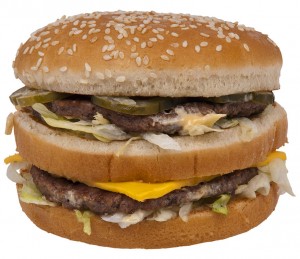 The stock has been a notable underperformer since the Great Recession ended, as the company has faced a number of operating challenges across its markets.

In the U.S., the steady economic recovery has eluded McDonald’s core low-income customers, many of whom are still pinching their pennies.

When it comes to the international markets, the company is still getting hit by a public relations nightmare from various supply chain issues in China and Japan. Management made aggressive expansion into new markets a key priority, but all that spending is looking like a waste, as international sales are still falling.

And yet, the stock popped nearly 5% in early trading Wednesday after McDonald’s earnings for the first quarter were released before the opening bell.

To be blunt, the results were bad. Global comparable sales, which measures sales at locations open at least one year, fell 2.3% last quarter. This was due to falling guest traffic across geographic segments. Comparable sales fell 2.6% in the U.S., 0.6% in Europe and 8.3% in the APMEA (Asia-Pacific, Middle East and Africa) region.

Total revenue dropped 11%, although to be fair, much of this was due to unfavorable currency movements. The strengthening U.S. dollar has taken a big bite out of sales for multinational corporations like McDonald’s. Excluding currency effects, total sales declined a more modest 1%.

One positive note is that the company continues to generate cash. McDonald’s is having a very hard time growing, but its existing operations remain highly profitable. This is thanks to its unparalleled scale and its world-class brand.

McDonald’s generated $1.3 billion in operating profit last quarter. One of the best reasons for continuing to invest in the stock right now is that it’s still profitable, and it uses its profits to pay a hefty dividend and buy back its stock each quarter.

In fact, the company returned $1.4 billion to investors through dividends and share repurchases in the first quarter. The stock’s 3.5% dividend yield is still attractive, and it remains one of the highest yields in the Dow Jones Industrial Average.

But more fundamentally, McDonald’s is facing severe structural headwinds. Consumers simply aren’t as blind to nutrition as they used to be. This is particularly true when it comes to younger consumers, many of whom are opting for Chipotle Mexican Grill (NYSE: CMG) and other fast-casual restaurants with fresher ingredients and healthier eating options.

In a way, McDonald’s is caught between a rock and a hard place. It built its reputation on being an affordable, low-price fast food restaurant. In order to improve its image for food quality and nutrition, it would have to use better ingredients, and that would almost certainly result in higher prices. But McDonald’s can’t really do that, because its core customer is highly price sensitive, and firmly on the lower-income side of the scale. It seems that the very thing the company needs to do to improve will alienate its core customer base.

Under normal circumstances, international expansion would be the answer. And to a large extent, McDonald’s has tried to take its business model overseas. It now operates more than 10,000 locations in the APMEA segment, which includes many emerging markets like China.

Unfortunately, McDonald’s is suffering a public relations crisis abroad. Specifically, its performance in Asia has been an unmitigated disaster.

First, a key supplier in China was found to be repackaging expired meat with new expiration dates last year. A worker was also caught reusing food that had fallen on the floor.

Then, several media outlets, including Reuters, reported that McDonald’s Japan issued an apology after customers found a tooth and plastic in their food. This caused the company to lose significant sales. Even worse, its public image suffered greatly, and has not recovered.

The key takeaway for investors is not to get too excited by the McDonald’s rally after earnings. The stock gain is nice, but the underlying fundamentals remain poor.

McDonald’s new CEO is set to update investors on the company’s turnaround plans on May 4. This will be a critical test as to whether McDonald’s strategy will continue to leave investors hungry.