One group of stocks that helped power the stock market higher over the past seven years was the media stocks. The sector, since the start of 2009, returned 315% versus 163% for the S&P 500. 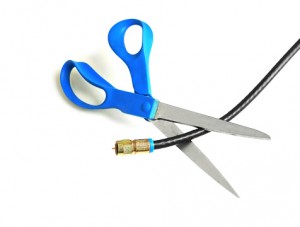 But these once darlings of the stock market have fallen out of favor. That’s because Wall Street finally awakened to the fact that changing viewing habits and disruptive technology have permanently changed the media landscape.

Millennials do not want to pay for bundles of channels they don’t watch. This fact has boosted online alternatives like Netflix (NASDAQ: NFLX) and Amazon.com (NASDAQ: AMZN). Dish Network (NASDAQ: DISH) has found its skinny bundle, Sling TV, enjoying increasing popularity too.

The new realities started dawning on Wall Street last August. That’s when The Walt Disney Co. (NYSE: DIS) warned about the loss of subscribers at its flagship ESPN network. The carnage after that announcement saw $37 billion wiped off the value of the biggest U.S. media companies in one day. That was the largest one-day drop in four years. 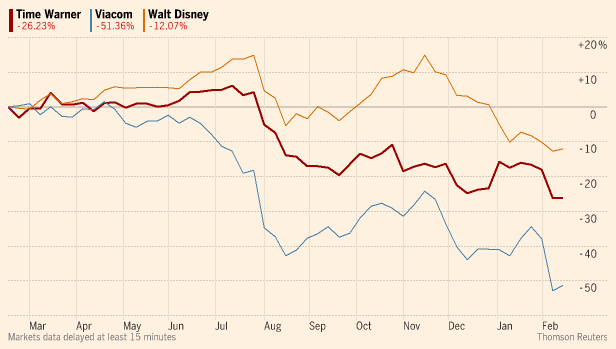 That news from Disney brought home to Wall Street analysts that the days of the very lucrative traditional pay-TV bundle are gone forever.

The new reality is that this new generation of viewers now consists of: “cord-nevers,” who have never paid a dime to watch TV; “cord-cutters,” who are canceling their pay-TV subscriptions; and “cord-shavers,” who are opting for those skinny bundles.

The latest reporting period brought no joy for the media firms. The S&P 500 media index fell twice as much as the general market. In addition to Disney, other media companies – Time Warner Inc. (NYSE: TWX), Viacom (NASDAQ: VIA), CBS Corp. (NYSE: CBS) and 21st Century Fox (NASDAQ: FOXA) – all suffered.

But what about the others in the sector?

The good news for CBS and Fox (and Disney’s ABC) is that these network broadcast channels are free, so their viewership and ratings have held up better than cable channels. This in turn allows them to retain advertisers.

These companies have also been able to create new revenue streams. A big one is charging cable and satellite companies retransmission fees to carry their channels.

Next we come to the two most-diversified media stocks – and the two I’m most interested in.

The first is Time Warner Inc. It raised its 2016 forecast above analyst estimates, pushed up its dividend by 15% and announced a $5 billion stock buyback. Great news, right?

Nope. Time Warner said its lost subscribers at its Turner cable networks. Plus its Warner Bros. film studio did not release a big hit in the past quarter. That combination was enough to send its stock spiraling down.

The big positive for Time Warner is HBO. Revenues there rose 6%. Its HBO Now offering lets viewers watch its programming without a pay-TV subscription. It now has over 800,000 subscribers.

Some activist shareholders are pushing Time Warner to spin off HBO. They should keep it. It will make the whole company more attractive to outside bidders. Rupert Murdoch, who owns Fox, already made one run at Time Warner. I expect another one.

Then we come to my favorite media company, Disney.

It probably owns the best-known media brands in the world – Disney, with Mickey Mouse, etc.; Marvel with all its superheroes; and, of course, “Star Wars.” That leads to nearly countless merchandising opportunities. Fiscal first-quarter operating income at Disney’s consumer products business jumped 23% to $860 million.

Obviously, “Star Wars: The Force Awakens” was a mega-hit. Quarterly operating income at its movie studio surpassed $1 billion for the first time ever. And it has a number of blockbuster movies in its pipeline.

But the majority of Disney’s profits still come from its networks division. The growth of services like Sling TV is helping to slow the decline in viewership for ESPN and its other networks. Yet, operating income at its media division still fell 6% to $1.4 billion.

With its other divisions doing well, CEO Bob Iger needs to adjust the media division to the new realities.

One example of an action Disney can take is to do what Time Warner did with HBO. Take ESPN “over the top” and offer it to viewers without the need for a pay-TV subscription.

I think Bob Iger is a pretty savvy CEO. With his emphasis on Disney pushing into new technologies, I expect it to stay the premier media company and its stock to resume its place as a Wall Street darling.