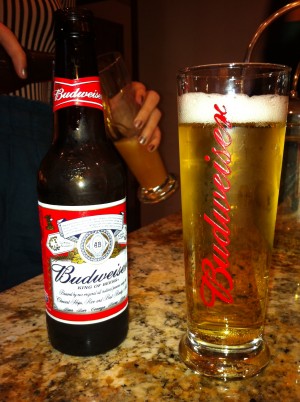 If successful, this would be just the latest in a string of audacious deals pulled off over the years by AB InBev’s CEO, Carlos Brito. The company’s humble origins can be traced back to a small Brazilian brewer by the name of Brahma.

And let’s not forget that AB InBev’s biggest shareholder, with a 12.5% stake, is another ambitious fellow by the name of Jorge Paolo Lemann, the co-founder of Brazilian buyout firm 3G Capital.

Why Bud Wants a Miller

There is logic behind the reasoning and timing of Anheuser-Busch InBev’s move on SABMiller.

There is nothing worse than flat beer. And that’s exactly what beer sales have been around the world for most of the big brewers.

Weak sales are the result of several factors. One is an economic slowdown, particularly in the emerging world. This makes AB InBev’s timing on the offer ideal. SABMiller’s stock is down over the past year because 70% of its sales are to China and markets reliant on commodities.

Beer sales have also been hit by a shift in the developed world away from the big beer brands and toward wines, spirits and craft beers.

But there has been one bright spot: Africa.

It is where SABMiller had its origins as South Africa Breweries. It still has about a 40% market share in Africa and the Middle East.

AB InBev has almost no exposure to these regions. About 70% of its sales come from the Americas, so the merger would finally give the company large exposure to big beer’s final frontier.

The acquisition of SABMiller would also fill in a gap for AB InBev in the Americas. It would add the countries of Peru, Colombia and Ecuador, where it has virtually no exposure.

But any deal would have to overcome a few large obstacles.

Beer Brands to Be Divested

One obvious hurdle is regulatory. Regulators in both the U.S. and China will likely require the combined company to divest some brands.

In China, SABMiller has a 49% stake in China’s biggest brewer, CR Snow, which has a 23% share of the Chinese beer market. AB InBev has 15% market share in China. 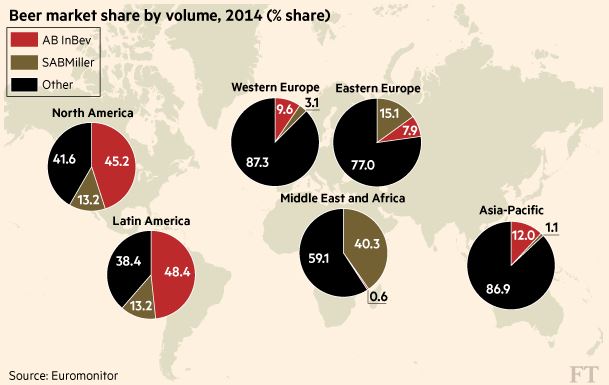 Luckily for the proposed beer merger, both Molson Coors and Snow’s parent, China Resources Enterprise Ltd. (OTC: CRHKY), will likely be happy to buy out the portion of the joint venture they don’t own. Any other disposals will likely be hungrily lapped up by other big brewers like Heineken NV (OTC: HEINY).

Other Flies in the Beer

There are two other potential sticky situations.

One is that SABMiller is a huge bottler for Coca-Cola (NYSE: KO), particularly in Africa. But Anheuser-Busch InBev is a bottler for rival PepsiCo (NYSE: PEP).

The likely result here would be a win for Coca-Cola. That’s because of Warren Buffett’s affiliation with 3G Capital and Jorge Paolo Lemann, and his sizable stake in Coca-Cola.

The trickier situation lies in Africa.

SABMiller operates much of its beer business in Africa through another joint venture, this time with privately held French beverage company Castel Group, which is controlled by 89-year-old businessman Pierre Castel. AB InBev needs to negotiate carefully with him, or else he may walk away, tarnishing that African jewel of a market.

Even if the big beer merger is successfully consummated, one threat still looms over AB InBev and the entire industry.

That is the rise of the small craft beer brewers. The CEO of SABMiller, Alan Clark, admitted that the big brewers ignored the craft brew sector for too long. He said, “We were too slow to recognize that the small players were ahead of the game.”

There are now more than 3,000 of these small players, according to the Brewers Association. A new craft brewery opens every 16 hours, on average.

Despite the purchase of some craft breweries by both firms, their market share continues to decline. For AB InBev, its share of the U.S. beer market fell from 48.8% in 2008 to 44.7% now.

Meanwhile, craft brewers’ market share doubled from 2008 to now stand at close to 10%. Craft beer sales rose by nearly 20% last year and now are worth about $20 billion.

The sharp rise is a real contrast to the flagging sales at the big brewers. The Brewers Association forecast craft brews will account for 20% of the beer market volume in the United States by 2020.

It remains to be seen if an even larger AB InBev can devise a strategy to deal with the rise of craft beers. Otherwise, even the glow from a vibrant African beer market will eventually fade, leaving its shareholders feeling flat.