Microsoft (NASDAQ: MSFT) reported earnings of $0.62 per share on April 21. Unfortunately, analysts were expecting the company to earn $0.64 per share. The miss caused the stock to gap lower and drop 7.2% on April 22. Since then, the stock has fallen another 4%. While the drop isn’t what current shareholders wanted to see, I think the decline has created a buying opportunity.

Looking at the daily chart, we see the gap lower from the earnings report last month. We also see that the stock is oversold based on the stochastic readings and the 10-day RSI. Both of these indicators are at or near their lows of the past year. In the case of the stochastic readings, they have just made a bullish crossover after dropping below 10. The 10-day RSI fell below the 25 level for only the second time in the last year. 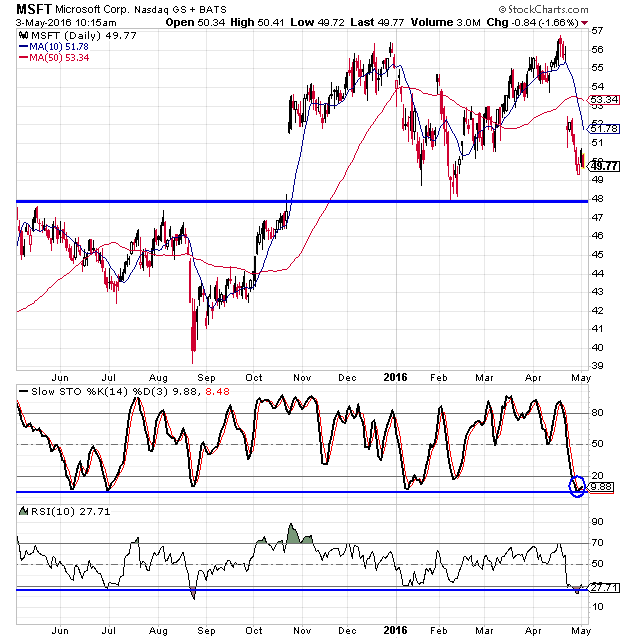 The last time the RSI fell below 25 was in late August, right before the stock rallied sharply for the next four months. The horizontal line at the $47.85 level marks the low in February and it also comes into play on the weekly chart.

We see on the weekly chart that Microsoft shares have been in an upward-sloped trend channel for the last three years and the lower rail of the channel is right at the $48 level presently. We see the horizontal line again at the $47.85 level and we can see how the $48 level acted as resistance in November 2014 and again in April 2015. That former resistance could act as support now. 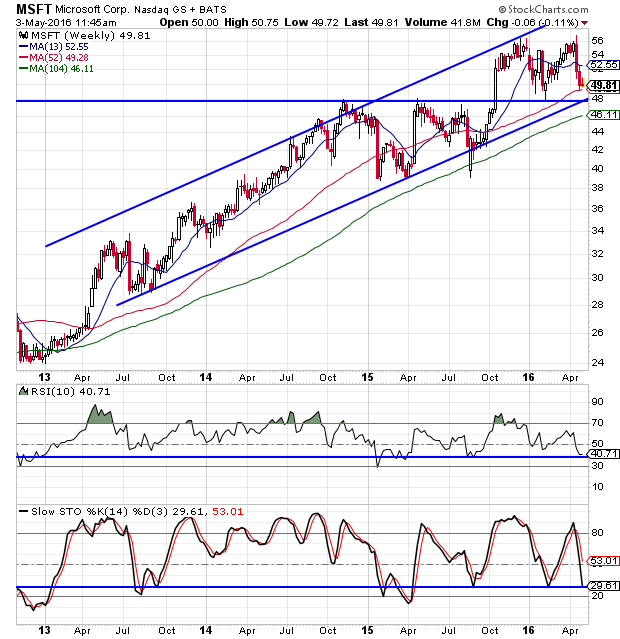 Looking at the weekly oscillators, we see that the 10-week RSI is right at the 40 level. That has been the point where the stock has reversed on several occasions in the past few years as the stock hit the lower rail of the channel. The weekly stochastic readings show that the %K line is down at 29.61 and the 30 area has marked the low on several occasions over the past few years.

There are so many things on the daily and weekly charts that make me think Microsoft shares head higher from here. We see the oversold levels from the daily oscillators as well as the flat-line support in the $47.85 to $48 range. On the weekly chart the oscillators aren’t in oversold territory per se, but they are hitting readings that have marked reversals in the stock. Then we have the lower rail of the channel coinciding with the flat-line support in the $48 area.

All of these things point to Microsoft shares moving higher over the next few months. I would look to buy the stock below $50 and target a move to $60 at the very least. On the downside, should the stock dip to $47.50, I would use that as a stop-loss point.