The easiest way to capitalize on gold's strength is through an ETF.

It's widely expected that easy money will be the norm through at least mid-2015, meaning that one of the simplest investments continues to be gold. Evidence of this is shown in the ten year chart of gold below, which shows two important things:

First, the three most recent quantitative easing programs (marked by the light blue vertical lines) have always been followed by a stronger gold price if viewed over a period longer than a few months.

And second, over the past 10-years, gold has only broken its 200-day moving average (the dark blue trend line) a handful of times. The closest pattern that matches what we saw in 2012 occurred in late 2008 when gold lost about 30% of its value. 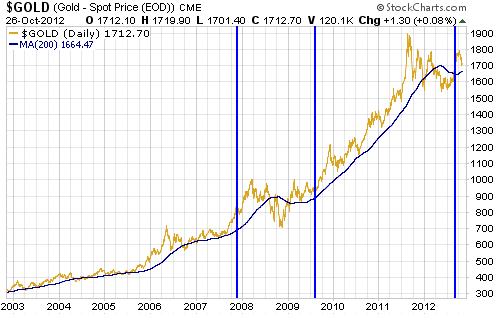 I know some will disagree with my assertion that an ETF is the easiest way to go, and say that buying and holding physical gold is a better approach.

If your goal is to get away from paper money as much as possible, and prepare for an economic collapse, or other similar catastrophic event, then I would tend to agree. Go with physical gold and keep it somewhere safe. When you need it, you'll know it. Hopefully you don't.

But for the millions of people who simply want to diversify their (paper) holdings with exposure to gold's upside potential, an ETF does the trick perfectly.

There are at least a half-dozen so called gold ETFs out there, but of the group there are only four that I'd really consider buying. The others either don't have the liquidity or are just too new for me to want to own for what is a relatively conservative investment.

The table below shows the most important metrics of these four gold ETFs. My top two choices are the iShares COMEX Gold Trust (NYSE:IAU) and the SPDR Gold Trust (NYSE:GLD). Both of these funds are backed up by physical gold stored in vaults.

Right off the bat I crossed off PowerShares DP Gold Fund (NYSE:DGL) because it uses gold futures as its price basis (the other three ETFs use spot price), has a high expense ratio and because its performance has lagged. That's three strikes. For the record, I only included because it shows up in a lot of gold ETF articles out there, and I wanted to point out why you should avoid it.

The ETFS Physical Swiss Gold Shares (NYSE:SGOL) is on the list because its expense ratio and performance are very competitive. However, its liquidity falls a bit short, trading only around 96,000 shares a day. And investors aren't picking up any outperformance.

Both GLD and IAU are pretty good funds. But for my money, I like the lower expense fee for IAU at 0.25%, versus 0.40% for GLD. IAU's three-year performance is also slightly better. While its liquidity is only half of GLD's, it's still a very liquid ETF.

The one drawback to IAU is that one share of the ETF represents 1/100th of an ounce of gold. By comparison, one share of GLD represents 1/10th of an ounce of gold. The lower 'cost' can make IAU more accessible for smaller dollar investments, and I think this is a big attraction to many Main Street investors. But there's something to be said for the less dilutive share-to-ounce ratio of GLD for what is really a very valuable underlying asset.

However, all things considered my favorite gold ETF is the iShares COMEX Gold Trust (NYSE:IAU).