I should preface today's article with the statement that I'm not a trader. I rarely trade, and when I do, it's only when I have a very strong reason to believe that a short-term or intermediate-term move could be significantly profitable.

But I have made some "trades" within the larger context of my precious metals investment thesis.

Now, the premise underlying all of my trades is that precious metals will continue to outperform.

That's the reason I own physical gold and silver. If I didn't believe these two metals were going to outperform, I'd sell them, and moreover, I wouldn't engage in the trading strategy I'm about to reveal.

Now, before I get into the trades – I want you to know that I don't go short metals. I don't use commodity futures. I only go LONG metals – which means that I'm typically buying one metal instead of another.

Basically, these trades are just a way for me to decide which metal to buy now, and if I'm feeling so inclined, which metals to "trade" with either options on an ETF like the SPDR Gold Shares (NYSE: GLD).

The first trade is the easiest and it involves an indicator that I look at anytime I'm about to buy gold or silver.

It's the gold-silver ratio.

I've talked about this ratio many times. And I've heard some feedback from people who (correctly) point out that it's somewhat useless in the event that both gold and silver are overvalued.

But… my thesis, which has worked quite well for me, is that both of these metals will eventually move much higher. 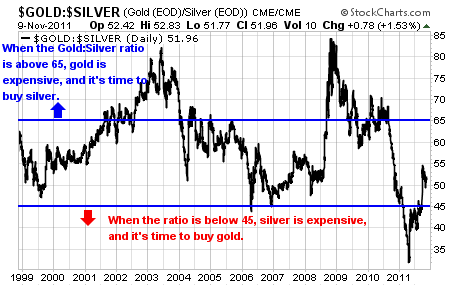 When these extremes hit, that's when I'll make a trade – usually by buying calls on silver or gold ETFs, depending on which extreme we're at.

You can also use this ratio to decide whether to buy physical gold or silver – if you're not inclined to trade options.

Right now, you'll notice that the ratio is right in the middle of the range – so there's really not a case to be made for gold or silver in relation to each other. You'll also notice that these extremes aren't hit too frequently. That's because they truly are extreme circumstances.

I've talked about my platinum trade before. I currently own shares of the ETFS Physical Platinum ETF (NYSE: PPLT).

Right now, for only the fifth time in the past 20 years, platinum is cheaper than gold. Typically, platinum gains an average of 61.5% in 24 months following this price disparity. 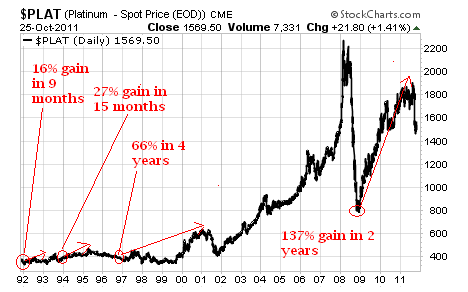 It's a solid trend. Unfortunately, PPLT doesn't have options, but you can buy it and sell it just like a stock. I'm currently up only a few percentage points on PPLT, so it's not too late to build a position – especially considering that it's STILL cheaper than gold.

As long as my precious metals thesis is correct, you can use these indicators to build intelligent positions in gold and silver.