Demand for natural gas as a power source keeps growing, according to the U.S. Energy Information Agency (EIA). It recently forecast that 2016 will be the first year our country burns more natural gas for power than coal. 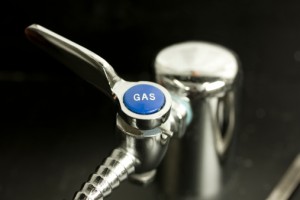 Yet natural gas was one of the worst-performing commodities in the first quarter, down 18.1%.

Lower and lower prices have been the ongoing theme for natural gas. It is wallowing at millennium-low prices currently, trading at roughly $1.90 per thousand British thermal units.

Natural gas makes the bear market in oil look like a picnic. And there is no relief in sight.

Way Too Much Supply

The problem is the massive glut of natural gas in the United States. Our shale gas formations have been too prolific for their own good. The Marcellus Shale formation, for example, is estimated to hold the equivalent of five years of U.S. consumption.

With winter coming to a close, the amount of gas in underground storage stands at an all-time record for this time of year. Inventories currently stand at 2.47 trillion cubic feet. That is an incredible 1 trillion cubic feet above the level of just one year ago. And it’s 52% above the five-year average. 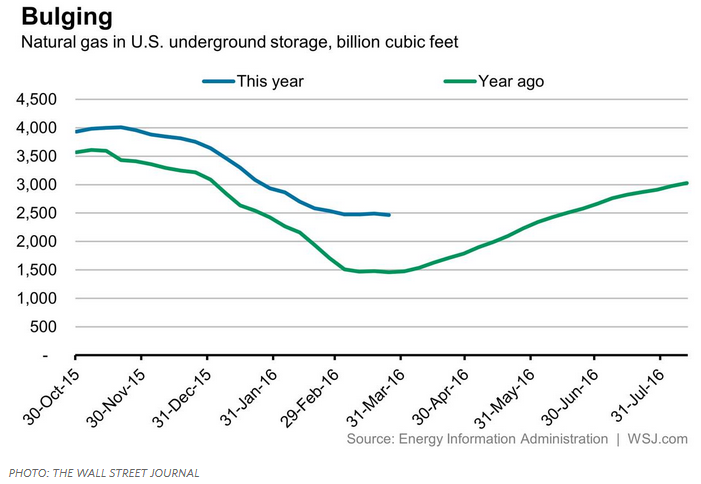 It is getting to the point where underground storage facilities are nearing capacity. It is possible that, by August, these facilities will be filled. According to the EIA, storage capacity in the lower 48 states is about 4.34 trillion cubic feet.

Maxed-out natural gas storage is a scary thought for producers. They will then have to either “shut in” production or basically sell their natural gas for practically nothing.

Producers have cut back on drilling new wells. In fact, the number of rigs drilling for natural gas is at an all-time low.

But the gas producers are continuing to pump very aggressively from their most productive wells, despite rock-bottom prices. This pushed U.S. natural gas output to its highest level ever. Data firm Platts Bentek said average daily output in February was 73.3 billion cubic feet.

It seems that natural gas producers have adopted the strategy that selling gas at any price is better than not generating any income and shutting down wells. This perverse “strategy” is the result of too much debt accumulated in the good times. Now many companies in the sector, such as Chesapeake Energy (NYSE: CHK), are simply trying to keep the lights on and stay in business.

No Relief From LNG Exports

Many natural gas companies were hoping the United States could export its way out of a glut. The forecasts for sales of liquefied natural gas to “eager” buyers overseas were very rosy.

Too rosy, as it turns out. Again the problem is oversupply. Big projects in the United States are coming online at the same time as large LNG projects in Australia.

The big market was supposed to be Asia – Japan, China and South Korea. But demand there has dried up. Prices for LNG there have fallen 35% just since the start of 2016. The price of $4.40 per million BTU is a record low for this time of year.

What about Europe? Fuhgeddaboudit!

Gazprom has the world’s largest natural gas reserves and is one of the lowest-cost producers. It has the most spare capacity (about 100 billion cubic meters) in the marketplace. That’s roughly equivalent to 25% of its output and about 3% of global production. So, like the Saudis, it is very capable of carrying on a “war.”

Estimates are that it would only cost Gazprom about $25 billion over the next five years to price U.S. LNG out of the market and win the “war.” That’s terrible news for the likes of Cheniere Energy (NYSE: LNG).

The president of a Japanese utility joint venture, Yuji Kakimi, assessed the LNG market for the Financial Times. He said, “My view is at least until the middle 2020s, a large amount of LNG will wander around the world seeking its final consumer.”

For me, that means the U.S. glut in natural gas is not going away anytime soon. That makes the entire sector an avoid for a very long time.