Financial markets are certainly in a brave new world.

The New York Times put it nicely. It said, “When you lend somebody money, they usually have to pay you for the privilege. That has been a bedrock assumption across centuries of financial history. But it is an assumption that is increasingly being tossed aside by some of the world’s central banks and bond markets.” 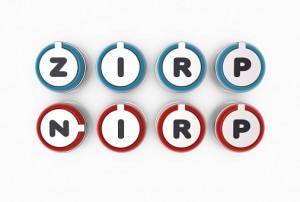 Welcome to the world of negative interest rates.

What was once just theoretical is now reality in Switzerland, Sweden, Denmark, the eurozone and most recently Japan.

Incredibly, we now have roughly $7 trillion worth of sovereign bonds around the world that have a negative yield. That’s about 30% of the Bloomberg Global Developed Sovereign Bond Index. A third of eurozone government bonds have negative yields.

There are a few winners though. Some lucky homeowners in Denmark now have mortgages with a negative rate. So the payment is principal minus interest.

Why have these central banks gone negative?

The main reason is that negative rates are a key strategy in the ongoing currency wars. Apparently, central bankers have read “Alice in Wonderland” – “Imagination is the only weapon against reality.”

The idea is that negative interest rates will weaken your currency. In fact, Sweden just went deeper into negative territory, to minus 0.5%. It certainly didn’t need to do this to boost its economy. Sweden’s gross domestic product is expected to grow at a relatively robust 3.5% this year.

Of course, central bankers don’t always get what they want. After the Bank of Japan went negative, the yen only went down for a day before reversing much higher.

The BOJ move so scared market participants that some unwound the yen carry trade – in effect, buying yen. A carry trade involves borrowing in a low interest rate currency like the yen for basically nothing and reinvesting the proceeds elsewhere.

In markets though, as elsewhere, actions have consequences.

So far, negative interest rates seem to be doing more harm than good.

In the epicenter of the negative interest rate earthquake are the financial companies. I believe it’s the main reason bank stocks have been getting clobbered around the world in 2016. 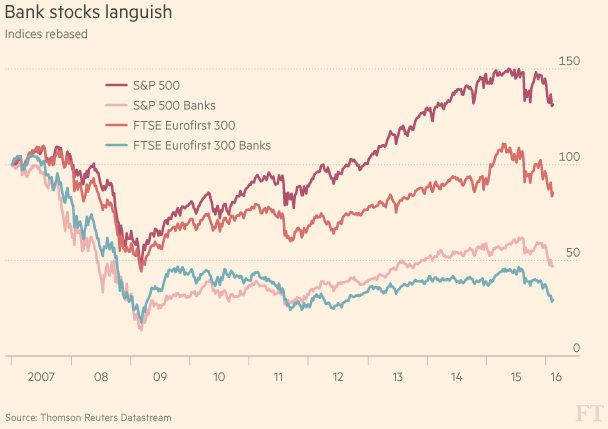 Standard & Poor’s estimates that Japanese banks will see their business profit hit by 8%.

And think of Europe, where much of the carnage has occurred. Most of its 6,000 banks are old fashioned institutions, similar to our savings and loan associations. They simply take in deposits and then lend the money out. That business model is now out the window. You can’t pay people to take out a loan and stay in business for long.

Close behind the banks are insurance companies and pension funds. How the heck are these institutions supposed to meet their long-term obligations with rates negative?

But in case you were worried, Wall Street traders will be just fine. They’ll buy a bond at a minus 0.10 yield and sell it at a minus 0.20 yield. Add in the usual leverage and the trader’s job will be done. Their fat paychecks and bonuses will still be there.

Negative Rates Coming to the US?

But the rest of the global financial system is being perverted by negative rates.

Thankfully, negative rates haven’t come ashore yet in the U.S. Will it happen here?

In her testimony before Congress last week, Federal Reserve Chairwoman Janet Yellen said there are questions about its legality here. But she did say that nothing – including negative interest rates – is off the table.

And others, such as former Fed Chairman Ben Bernanke, have hinted about the possibility of negative rates coming to the U.S.

Let’s not forget also that the Fed ordered banks to consider the ramifications of negative interest rates in their latest stress test scenarios. And a forecast done last summer by the former Minneapolis Fed governor, Narayana Kocherlakota, had negative rates penciled in for the not too distant future.

I don’t think the Fed will go negative … yet. But I’m in the camp of hedge fund billionaire Ray Dalio. I think the Fed is one and done as far as rate hikes go in 2016.

In this “through the looking glass” financial world, the Fed can’t raise rates. That would push the dollar much higher. An overly strong dollar has already wreaked havoc on the commodity markets and the emerging world. An even stronger dollar would make the global situation even worse.

If somehow the dollar gets too strong, the Fed could go negative just to weaken the dollar.