At this week’s UBS Global Media and Communications Conference, Netflix (NASDAQ: NFLX) made an announcement that seems to have blown past investors. The company said it would probably not make any more studio-output deals going forward. 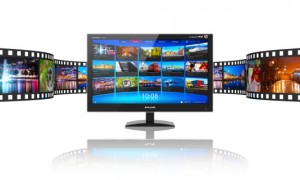 The Netflix announcement means that when studios produce their usual slate of movies, Netflix will not compete in the market for those movies anymore. In other words, kiss those “new releases” goodbye.

Instead, Netflix said it would continue to push money into original programming. That is terrible news for investors, albeit great news for consumers who have enjoyed the high-quality programming. The implications here are significant. It’s yet one more reason why I think the Netflix train has run out of track, and is about to plunge off a bridge.

First, this news tacitly signals that Netflix does not have the money to compete for those new releases.

Content Officer Ted Sarandos said, “When we have Paramount films, it means nothing to people.” What is he talking about? Paramount releases films for the following franchises: “Mission: Impossible,” “Terminator,” “SpongeBob SquarePants,” “Paranormal Activity,” “Transformers,” “Shrek” and “Star Trek.”   You better believe people care about those films to watch at home! That’s an unbelievable statement and I think it is intended to downplay how seriously adverse a development this is for Netflix stock.

That means Netflix is giving up market share to competitors like Apple (NASDAQ: AAPL), Amazon.com (NASDAQ: AMZN), Alphabet (NASDAQ: GOOGL) and Hulu. Now we have Discovery Communications (NASDAQ: DISCA) getting into the game.

So Netflix will rely solely on past films and TV series, plus original content. The best content isn’t cheap, either. Netflix ponied up $45 million for ABC’s “Lost,” for example.

While the original content play remains a great feature for Netflix, it is also highly problematic. For starters, it’s expensive. A well-produced hour of television costs upwards of $3 million per episode. Netflix simply doesn’t have deep enough pockets to maintain or expand original content production beyond a certain point. Yes, its $2.4 billion in cash will give it some leeway, but it continues to produce negative free cash flow.

The other problem that investors must be wary of is that Netflix refuses to tell us how many viewers any given show draws. A third-party service has attempted to approximate viewers. “House of Cards” is Netflix’s big hit and apparently it attracted 6.5% of subscribers in its first 30 days of availability. If this applies to domestic subscribers, it translates to only 2.7 million viewers in total.

That’s far below the audiences for hit network and cable TV shows. The lowest-rated series for network television comes in at 3.4 million viewers. The problem is that Netflix only generated $162 million in net profit in the trailing 12 months. It has negative free cash flow. Just how long will it be before the company has to raise prices, raise capital or scale back programming?

Netflix is also trying, and by its own account having a lot of difficulty, to obtain global licensing rights to various content. Some of the problems are political related to specific regions. The larger problem, however, is cultural. People in places like China have no interest in U.S. movies except for tent poles. People in other various countries have no interest in watching films of another country in general. Film snobs here in Los Angeles may love French films, but that’s not the case in many other countries.

Chief Content Officer Ted Sarandos said it ‘has not been an easy road’ to convince TV networks and studios to sell global rights to the streaming service. Mr. Sarandos said Netflix is facing ‘some resistance,’ mostly from studios’ regional sales teams ‘who don’t want their jobs marginalized.’ The streaming service isn’t asking for a discount when negotiating for global rights, Mr. Sarandos said. As a result, he argued it should be an ‘economically neutral’ proposition for studios to license to Netflix versus strike deals on a territory-by-territory basis with regional broadcasters.

What does that mean? That it will cost Netflix a lot of money – money it simply does not have.

Netflix in a Race to the Bottom

For now, Netflix may be the aggressor in acquisitions, but that’s going to be finite. Competition will grow, and all the competition has a lot more money than Netflix. Streaming is now a commodity. Netflix has first mover advantage, but as the market matures, it becomes a race to the bottom over market share.

Netflix’s own house of cards has gotten too high and its base is crumbling. The house is coming down. If you are long, get out NOW. If you’ve got the stomach and have patience, consider shorting.

Tesla, Apple and Google Are Creating This

When people think of Tesla, what immediately comes to mind is the world’s first electric car. It’s an astounding achievement. But what few people realize is that Tesla’s next technological wonder could easily put it to shame. Morgan Stanley says this breakthrough could save the American economy $1.3 trillion each year. And Tesla’s not the only one racing to get it out the door. Apple and Google are working on their own versions too.

Get the whole story right here.