There is a 94% chance you’re going to read that headline on Wednesday morning.

That’s because the direction of stocks has been a solidly reliable predictor of prior presidential elections.

For Mitt Romney, this is grim news indeed.

Though I’ve discussed the market’s ability to predict elections before, here’s a quick review:

When the stock market sported gains in the two months before the election, the incumbent was re-elected 15 of 16 times. Conversely, when the stock market declined during that time, the opposition won 10 of 12 races. The combined data, which InvesTech Research compiled, shows that the stock market predicted the next president a mind-blowing 25 of 28 times (89.2%).

Of course every presidential race is different, although they usually come down to a few key issues. This year, the hot topic was hands down the economy, lending the “market return theory” some additional credence to its predictive ability.

It seems that the market even predicted just how close the race would be, too.

On October 31, the S&P 500 Index closed at 1,412, a mere 0.4% higher than its 1,406 close on August 31. Accordingly, and by the tightest of margins, the market anticipates the people will re-elect president Obama on Tuesday.

Though it’s impossible to guarantee tomorrow’s result, the market clearly has an expectation. And it’s not Romney.

Despite the potential for inaccuracy this time around, stock returns foretell that an Obama victory tomorrow is highly likely, if not assured. However, that outcome isn’t bad news for investors. Despite the gridlock among the White House, Senate and House on political agendas, the expected future presidential and Congressional combination has treated investors kindly.

Research compiled by Bank of America and Oppenheimer Funds shows that stocks respond best when a Democrat is in the White House and Republicans control the House and Senate. Stocks have gone up with a Democrat as president and generally gone up to a lesser degree with a Republican in the Oval Office. 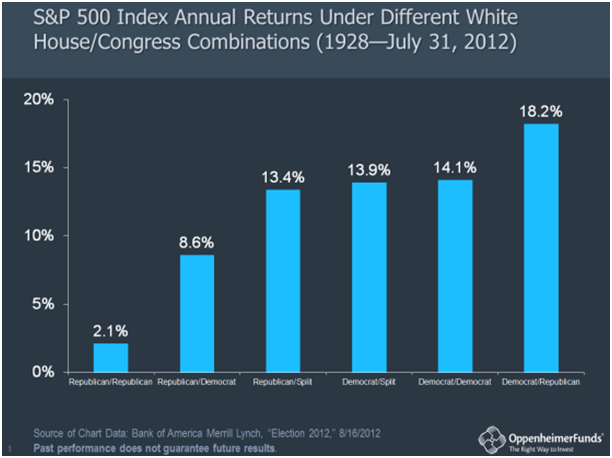 This trend points to more gains in the major indices with an Obama triumph on Tuesday. It now appears that Democrats will keep the White House and Congress will remain mixed, setting the stage for a very positive stock market (13.9% annual returns).

However, as many analysts have brought up, market returns and the sitting president are largely irrelevant.

According to popular market strategist Barry Ritholtz, “People radically overstate how much credit any president deserves for the overall economy and how much blame they get things that go wrong. A president’s economic record largely depends on what the economic climate was when the president started.”

So can the president really influence the indices?

I’m in the camp that says the president can’t. Here’s why  …

Typically, a president inherits a boom or bust economy, resulting in an up or down trending market. Furthermore, the performance of the indices over the past few presidents may have radically swayed more than a few of the six average returns.

Performance during the Bush era was abysmal. I’m not blaming Dubya; just citing actual market returns. Moreover, by the time president Obama took office, the indices really had nowhere to go but higher. These two presidential terms alone may have shifted the average returns significantly, perhaps rendering them useless.

And useless correlations between returns and the presidential party seem to be par for the course. After sifting through several research reports regarding correlations between politics and equity market returns, only two relationships seemed reliable enough to bear importance. And again, InvesTech came to the rescue in both cases.

The next correlation won’t do us much good until 2015. Data shows that there is a strong positive bias for holding stocks during the third year, which is the year before the election. It is often the best year in the 4-year cycle for stocks and one that’s likely been fortified because there has been only one recession to have started during an election year.

Popular (and successful) fund manager Jeremy Grantham shares this belief. In fact, Jeremy is a huge proponent of the presidential cycle.

“I’ve hero-worshipped the presidential cycle. Going back to 1932, if you take the first and second year together, they’ve had no real return in the market. All of the return has been compressed into a gigantic Year Three and a respectable Year Four. For us, the cycle years start on October 1st. So now we’re in the dreaded first year.”

“History speaks pretty clearly that the markets do better with Democrats. Republicans’ ideas of what constitutes fiscal responsibility simply are not good for the stock market. Democrats have many tendencies, but one of them is to look after the workers, and actually that tends to be good for demand and good for markets. These capitalists who are desperate to elect Republicans should study their history books.”

Thus far, the odds favor an incumbent victory, which Grantham will be happier for.

We’ll see who the big winner is tomorrow evening. Even though the market has a clear preference, please remember to vote Tuesday.