With crude oil teetering around $30 per barrel in the United States, the oil industry is reeling. Earnings and cash flow are collapsing across the oil sector, causing stock prices to fall. If that weren’t bad enough, oil dividend payments are now in jeopardy. 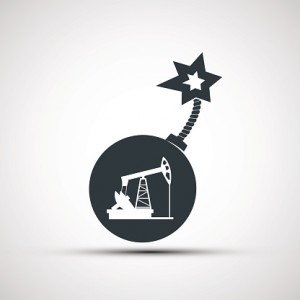 The oil patch has seen some high-profile dividend cuts from major companies. Investors likely remember pipeline giant Kinder Morgan (NYSE: KMI) slashing its dividend by 75% to conserve capital. The collapse in commodity prices has brought the entire energy sector to its knees, and now all eyes are on which oil dividends might be next to get the ax.

The energy sector encompasses a wide range of business functions, from the upstream (exploration and production), to the midstream (pipelines and terminals), to the downstream (refining). Upstream companies are getting hit hardest from the fallout in the energy sector, followed by midstream to a lesser extent. Downstream firms are actually doing well in this environment because their refining spreads widen when oil falls, so their oil dividends are safe.

Therefore, the upstream and midstream companies are the ones in danger. The integrated major oil companies have a combination of all business segments, and they have mostly reaffirmed that their oil dividends are safe.

However, ConocoPhillips (NYSE: COP) is a stock to watch. Unlike its Big Oil peers, ConocoPhillips is not integrated. It spun off its downstream unit, and as a result, it is an independent exploration and production company. ConocoPhillips pays a $2.96 per share annualized dividend. At its current stock price, that equates to a tantalizing 8% yield.

But ConocoPhillips is much more vulnerable to falling oil than its integrated peers. ConocoPhillips’ net profits are reduced by $40 million to $45 million for every $1 per barrel fluctuation in West Texas Intermediate crude. Consequently, the oil crash is causing it to lose billions. ConocoPhillips lost $1 billion last quarter alone.

The company can’t continue to pay its hefty dividend if it’s losing money. As a result, investors should be aware that ConocoPhillips’ dividend is in danger.

Such high double-digit yields are warning signs that the market is pricing in steep distribution cuts of 50% or more, and possibly full suspensions. It was widely thought that because these midstream operators run “toll road” style businesses with fee-based assets, their cash flow would not be affected by the falling price of oil.

That means they are forced to cut dividends to pay for capital expenditures. It’s a necessary evil because spending on future projects now is what provides cash flow later. This is the situation Kinder Morgan found itself in when it decided to cut its dividend.

A Wave of Potential Bankruptcies

The stocks most likely to see a coming wave of bankruptcy activity are the upstream MLPs. These are onshore shale drillers that have the worst of everything: they are non-integrated, have an exploration and production focus, plus are saddled with highly indebted balance sheets.

For example, Breitburn Energy (NASDAQ: BBEP) and Linn Energy (NASDAQ: LINE) are now in penny-stock territory. It’s readily apparent that their units and bonds are pricing in significant risk of bankruptcy. Breitburn has $3 billion in long-term debt with only $12 million in cash on the balance sheet. Meanwhile, Linn spent billions to acquire Berry Petroleum, a costly process conducted at the peak of energy prices which has now saddled the company with $10 billion in total debt.

These companies are hemorrhaging cash, and making matters worse, they have to deal with a revaluation of their oil properties this spring. That’s when their creditors will reassess the value of their reserves.

If the banks determine that the MLPs’ reserves are not worth as much as they were last year – which is highly likely considering the continued decline in the price of oil – then these companies may see their credit facilities cut off. That could be a disastrous event, and the markets are now pricing in insolvency risk.