Can you smell it?

The ongoing government shutdown, the country approaching its debt ceiling, worries over a potential default…yes, fear is in the air. And heightened investor fear often leads to incredible investment opportunities.

Right now I think the market is offering us one of those chances. Take a look at the chart below. 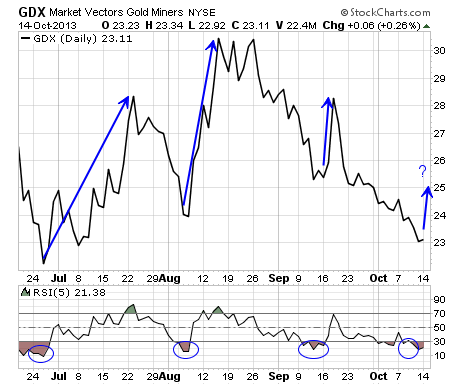 The Gold Miners (NYSE: GDX) have been absolutely crushed over the past year. The ETF that tracks gold mining stocks is back down to 2008 levels. If you’re a long-term investor with contrarian tendencies, there is no doubt that now is a great entry point.

But some of us like to mix-up our long-term investments with a few nimble plays, particularly when we are greeted with great set-ups.

But there’s one important indicator that suggests the beaten down sector is ready to bounce higher.

Take a look at the RSI readings below the GDX chart.

The RSI is an overbought/oversold oscillator that compares the performance of an equity – in our case a highly liquid ETF – to itself over a period of time. It should not be confused with the term “relative strength,” which is the comparison of one entity’s performance to another.

The blue circles in the chart above indicate each time GDX hit an extreme oversold reading.

After each oversold reading, GDX rallied almost immediately. Some of the rallies – including the latest in September – lasted only a few days. But the gains were there if you were quick enough to take them.

Other rallies lasted two to four weeks and offered opportunities for exceptional profits.

RSI is an important tool that allows you to gauge the probability of a short- to intermediate-term reversal. It does not tell you the exact entry or exit point, but it helps you be aware that a reversal is on the horizon.

Since I’m a contrarian at heart, I prefer to buy an index when a highly liquid stock or ETF reaches an extreme oversold state.

So let’s explore ways to take advantage of the oversold reading in GDX. Obviously, you could buy the ETF outright. A round lot (100 shares) would cost you roughly $2,300.

Or you could sell puts. Selling puts requires far less capital…roughly 80% less. Not only that but, you are able to select the price in which you want to buy the stock or in this case the ETF outright. It’s my preferred way to take advantage of extreme oversold readings.

And I’ve been using the same strategy since late May in GDX for my High Yield Trader service. So far, so good…we’ve seen gains of over 24% while the ETF has struggled mightily.

But regardless of the strategy, what’s truly important here is the opportunity.