Stop me if you’ve heard this before: The strong U.S. dollar is hurting corporate profits. 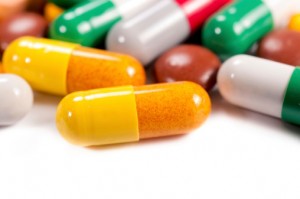 It’s a familiar theme throughout this earnings season, but one that rings true nonetheless. For large multinational companies, the rising U.S. dollar has taken a big bite out of sales and profits. That’s because sales conducted overseas are now worth less when they are converted back to the U.S. currency.

One of the hardest hit groups from this currency headwind is Big Pharma. Large pharmaceutical companies do business all across the world. Some actually generate a greater portion of revenue abroad than in the United States.

Pfizer (NYSE: PFE) is a textbook case of why the strong dollar is more of a curse than a blessing. Fortunately, the company’s underlying business remains sound, and it continues to return a huge amount of cash to investors.

Pfizer earnings revealed $0.51 per share in adjusted EPS – which strips out certain one-time items like discontinued operations – on $10.8 billion in revenue. Revenue and adjusted EPS declined 4% and 11% year-over-year, respectively.

This certainly looks like weak performance that should worry investors. But the truth is, most of the damage was due to foreign exchange. Excluding currency effects, revenue would have increased 2%, which is a much better picture of Pfizer’s performance.

Going forward, Pfizer has a number of catalysts in its drug pipeline to ensure future growth. During the first quarter, Pfizer saw strong results for the Prevnar 13 vaccine, which is used to protect against pneumonia and other infections.

In addition, last quarter the company launched Ibrance, a therapy for first-line breast cancer. Last but not least, the company noted that the atrial fibrillation drug Eliquis saw positive adoption among cardiologists.

A separate growth catalyst is the pending acquisition of Hospira (NYSE: HSP). The $17 billion purchase of Hospira, an industry leader in injectable drugs and infusion technologies, would add significantly to Pfizer’s portfolio. Absorbing Hospira would also bring a great deal of synergy to Pfizer’s existing Global Established Pharmaceuticals division.

Moreover, adding Hospira would give Pfizer an even bigger footprint in the emerging markets. Opening new markets is a critical test for Big Pharma, as underdeveloped nations present a much greater opportunity for growth than mature economies like the United States. Pfizer’s emerging market pharmaceutical revenue grew 10% last quarter, which explains why the company intends on further growth in these markets.

Despite the notable currency headwind, Pfizer remains a cash cow. Even though the top line is stagnating, it’s mostly due to currency. This has more of an artificial effect, because underlying demand remains strong. Pfizer still generates a lot of cash, which it’s aggressively using to create value for shareholders.

This is why Pfizer shares have continued to rise, despite the dollar pressure. The stock is up 10% in the past year, not including dividends.

Dividend investors should love Pfizer. Over the past five years, Pfizer has increased its dividend by 9% compounded annually. This has served income investors very well, as the stock offers a hefty 3.2% dividend yield. In addition, the company returns even more cash through share repurchases.

Pfizer bought back $6 billion of its own stock in just the first quarter of the year. This lowered Pfizer’s share count by 184 million shares last quarter, which helped boost earnings per share.

Fortunately, Pfizer is still modestly valued. The stock trades for 15 times forward earnings, which is a discount to the broader market. Pfizer’s cash returns are the icing on the cake.

It’s easy to get caught up in the negative headlines based on foreign exchange, but Pfizer’s underlying business is sound. It still rakes in a ton of cash flow, which the company has used to reward shareholders with higher dividends.

For income investors, there are few better Big Pharma stocks than Pfizer.