Big shot commodity traders don’t like to buy oil when prices
are high anymore than you do, and they’ll take steps to avoid doing so. But you can’t possibly hope to beat them at
their own game when it comes to investing…can you?

Today, I’m going to discuss one of the most elemental ways
that “they” hedge their bets, and how you can use it in your own portfolio to
profit every time.
First, there are a few important facts you should know about
crude oil and the petroleum products we get from it.

You might notice that spikes and dips at the gas pump
don’t necessarily track exactly with spikes and dips in the price of crude
oil. That’s because only half of all
crude oil gets turned into gasoline. The
other primary products are diesel fuel, jet fuel and heating oil.

As you might imagine, demand for different petroleum products
fluctuates seasonally. Heating oil
prices rise in the winter. You might
think that the southern hemisphere’s “winter” would even out the fluctuations,
but the northern hemisphere has 90% of the world’s population – so it’s the
northern winter that drives heating oil prices.

Likewise, demand for gasoline, jet fuel and diesel all rise
during the summer months. People drive
and fly more in the summer. 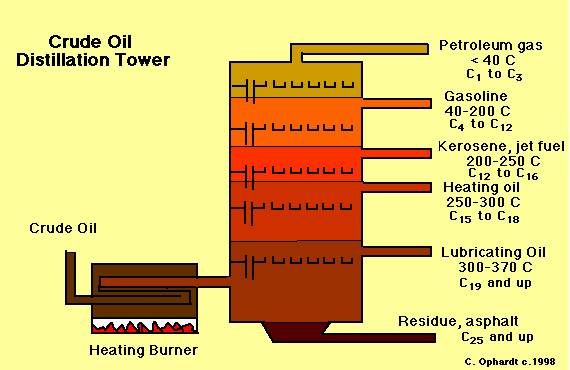 It sounds complicated, but it’s the same basic operation as
any whiskey still which separates heavier water from lighter alcohol by
carefully monitoring boiling temperatures. Water boils at 212F and alcohol boils at 173F. So as long as the temperature stays below
212F, alcohol vapor will escape and leave most of the water behind.

Okay, so different crude oil products boil off at different
temperatures, and there’s some seasonality to the prices for each product. How can we possibly profit?

We’ll profit in a similar way that the big-shot crude
oil traders profit – with something called “the crack spread.”

Most investors might think this type of “trade” is too
advanced, but it’s really very simple. The crack spread trader simply looks at the futures prices for two or more
different petroleum products, and buys and sells accordingly.
The most basic crack spread is the one we’re all tacitly
familiar with: the difference of fluctuations between crude oil price and
gasoline price. You can see this spread
for yourself by typing $GASO:$WTIC into your favorite stock quote site. I like stockcharts.com. $GASO is the ticker for gasoline prices,
$WTIC is the ticker for crude oil prices. So the ticker $GASO:$WTIC divides the price of one gallon of gasoline by
the price of one barrel of oil.

Doing so will give you this chart:

Since there are 42 gallons of oil in a barrel, you can
multiply this ratio by 42 to get the actual profit margin per unit. When this chart is high – say above .0275 –
it tells us that refiners are more profitable and that crude oil producers are
getting pinched a little. At today’s
ratio of .0278, multiplying by 42 gives us 1.16. That means a profit margin of 16% for every
gallon of crude oil refined into gasoline. (That’s a simplification, since not every gallon of crude CAN be turned
into gasoline, but it’s a good yard stick for our purposes.)

Compare that to the seasonal low back in October of .0245 –
which when multiplied by 42 gives us 1.029, or just under a 3% profit
margin.
If you had a futures account you could make all kinds of
wacky trades, but I recommend simply buying and selling stocks related to each commodity. It’s easier, and has the potential to be even
more effective, as stocks tend to magnify the volatility of their underlying
commodity – all things being equal. A
company won’t go anywhere if it’s fundamentals are bad – even if its underlying
commodity skyrockets.

This ratio, like gasoline prices, follows seasonal patterns. It typically peaks in spring as refiners
prepare for higher gas prices, and demand for crude oil in general slumps along
with heating oil demand. What this means
though is that right now, with this ratio on the upswing, refiners get a nice
bump in share price. They’re more
profitable, it’s showing up on their balance sheets, they’re in the news more
because of this profitability, and all of it is kind of a self-fulfilling
prophecy for traders that pile into positions based on this seasonality which
pushes everything a little further askew in favor of refiners at the detriment
of producers.

So how can we play against the traders with a regular old brokerage
account? We’ll take the other side of
the trade. We’ll buy producers right
now, when they’re cheap.

The biggest oil companies like Exxon (NYSE: XOM), BP Plc
(NYSE: BP) and Chevron (NYXE: CVX) do most of their own refining – so they’re
not the best way to play this spread.

What this spread does work for is smaller crude oil
drillers, explorers and producers that don’t have any exposure to
refining. I’m talking about companies
that usually get beat up during the early spring season every year. This crack spread shows when these companies
are least profitable and also gives a great indicator when we can build a
position in a company we like.
Producers aren’t likely to get any cheaper than they are
this time of year, for the reasons I’ve laid out. And right now, in Global Commodity Investing,
I’m really excited about a small American oil producer in the portfolio. It’s a strict producer of crude oil, and for four
of the past five years, buying in March and selling in June was very profitable.

That’s not a bad trend. And while I like this stock as a long-term holding, you could do worse
than to buy it in March and sell it in June every year.

To get the name of this stock, I encourage you to click here
and take a look at the entire Global Commodity Investor portfolio for a 90-day
trial.