Before I begin, I want to remind you about my recent webinar – How to Collect 15% Income Payments from Stock Market Insurance. In this interactive video I discuss one of my favorite strategies for producing income while protecting your portfolio. And I included a trade or two for you to try out. Enjoy!

Now on to the topic of the day …

The four-decade reign is officially over.

The two major Greek parties – conservative New Democracy and socialist PASOK – no longer hold the majority in Parliament. Greece’s political and financial morass has managed to deepen even further and their ability to deliver on their commitments to the ECB and IMF is very much in doubt.

As a result, the euro stands at a critical juncture. 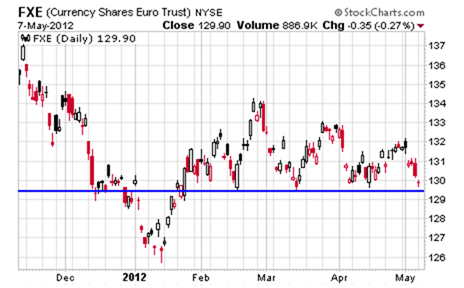 The blue line represents what has been strong support at approximately $129.50 for the CurrencyShares Euro Trust (NYSEARCA:FXE). Watch this level closely, because a definitive break below “the blue line” could lead to a sharp decline in the euro that shouldn’t come as a surprise to anyone.

Over the next several weeks, Greece has to introduce new drastic austerity measures worth $19 billion while simultaneously receiving $30 billion in rescue loans from the Eurozone and IMF.

And Alexis Tsipras, the head of the radical left Syriza group, which became the second-largest party in Parliament by picking up a mere 16.8% of the vote, has pledged to defeat any attempts at a pro-austerity coalition.

This could be the trigger that spells disaster over the short term for the euro (FXE).

Continued failure by Greece's parties to agree on a coalition could force a second snap election within 35 days.

But does all of this Greek nonsense really matter at this juncture? The euro, as it stands now, is destined to fail.

Inevitably, the euro is going to contract into a smaller core area – common sense tells us this is the only way it can survive. The writing has been on the wall since the beginning.

An overwhelming number of German economists, 155 to be exact, signed a declaration stating a delay was needed before transitioning to the new currency because they all agreed other prospective euro members had not reduced their deficit and debt levels to form a “workable monetary union.”

But creative accounting saved the day.

So as a self-directed investor, how can you protect yourself against a break beneath the “blue line?”

As a huge proponent of using options, the answer is easy – covered calls.

For buy-and-hold investors, covered calls are one of the most effective ways to hedge against short-term declines in the market while simultaneously lowering the cost basis of your investments.

Better yet, covered calls are one of the more conservative options strategies, in which you write (sell) calls against equities or ETFs that you already own. The impact of this is twofold.

Next week I will detail the process of selecting covered calls and the most effective ways to use them to protect your buy-and-hold portfolio.

Until then keep a close eye on “the blue line” in FXE.