The No. 1 economic indicator is sending a warning signal . . .

The U.S. Economy Will Enter a Recession Within 12 Months

And the coming economic downturn could send stock prices plunging 20% to 50% – before the Fed officially declares that the recession has arrived.

Click here to protect your wealth with my Bloodbath Trading System.

The “yield curve” has become one of the best predictors of a recession.

Since 1956 there have been seven recessions in the U.S. And the yield curve has accurately predicted each and every one!

This morning, the yield curve for U.S. and U.K. bonds inverted.

So, wat is an inverted yield curve?

Just check out this chart from Bloomberg: 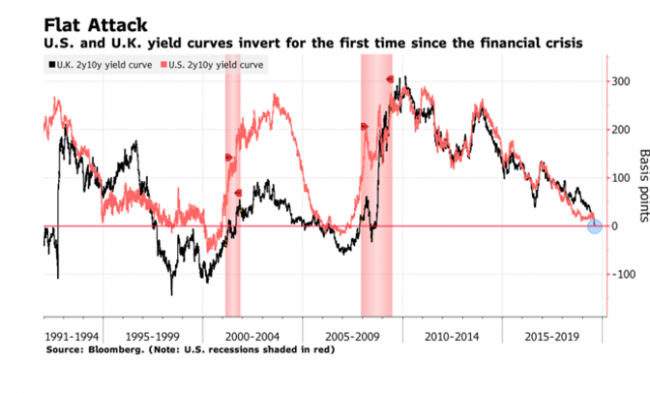 According to Credit Suisse, the average recession occurs 22 months after the yield curve inverts.

But don’t get too comfortable.

The stock market typically crashes before the Fed officially reports a recession. That’s because gross domestic product (GDP) measures what has happened in the past.

Typically, signs of a recession are extremely obvious months before the official government report.

Right now, we’re already seeing some of those signals.

Escalating trade wars are hurting economies around the world. And the tensions between Washington and Beijing appear to be growing – without a clear path to resolution.

Today, Germany reported that its economy shrank by 0.1% between April and June. And analysts at Deutsche Bank predict another decline in the current quarter.

That means Germany is headed for a recession – with two consecutive quarters of negative economic growth.

Meanwhile, Chinese factory output fell to its slowest pace in 17 years. This decline is due to the escalating trade wars and disruption to the global economy.

This is big news – since China is the No. 1  exporter of goods and services. And Germany is No. 3.

The current bull market is coming to an end. And market volatility is increasing very quickly.

This is the perfect setup for my Bloodbath Trading System. And it’s the perfect time for you to get started – before stocks plunge 20% to 50%.