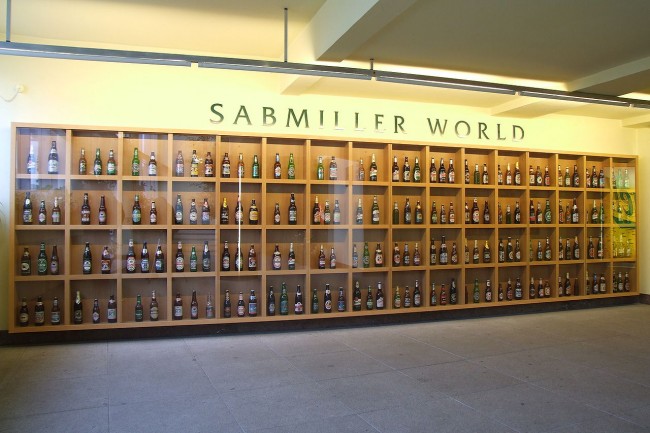 Investors are toasting to SABMiller PLC (OTC: SBMRY) after the brewing giant reported a rise in underlying sales for the most recent quarter. As a premier international company with an emerging-market focus, SABMiller has been hammered by the rising U.S. dollar this year.

The strengthening U.S. dollar against a basket of international currencies has weighed down revenue and earnings growth for international companies. However, excluding this factor, SABMiller continued to grow, thanks largely to its premium-priced brands.

Of course, the biggest news on SABMiller is its pending $108 billion takeover by Anheuser-Busch InBev (NYSE: BUD). Here is a rundown of SABMiller’s quarterly performance, and what lies ahead for the beer behemoth.

Overall, SABMiller suffered a 12% year-over-year decline in quarterly revenue, to $10 billion. But virtually all the decline was due to the foreign exchange market.

In the international markets, SABMiller operates a number of highly popular beers including Castle, Peroni, Snow and Grolsch. These international brands helped SABMiller improve its performance in the critical emerging markets. Premium-priced beers such as Castle Lite in South Africa and Cusquena in Peru gained popularity last quarter and fueled its strong growth rates.

The results look much better after stripping out currency. This quarter was very important for SABMiller to demonstrate that the company is worth the massive price tag. Underlying demand for SABMiller’s products remains strong, indicating that currency is having more of an artificial financial effect.

Nevertheless, the impact of the rising U.S. dollar is very real. Shares of SABMiller had fallen 18% in the four months through mid-September, when news of AB InBev’s takeover interest first surfaced. This suggests that AB InBev wants to pounce on its smaller rival when it is vulnerable and the stock price is declining.

Rationale for the Deal

Over the past several years, the global beer industry has slowed. Industry majors like AB InBev and SABMiller have experienced a slowdown in sales, as most of the growth has gone to smaller, craft brewers. In the United States, SABMiller’s core brands include its flagship Miller lineup, Blue Moon and Hamm’s, as well as Coors Light through a joint venture with Molson Coors (NYSE: TAP).

As a result, the industry is going through a wave of consolidation, as large companies realize the easiest, quickest way to obtain growth is to buy it.

AB InBev has mastered this growth-through-acquisition strategy. The company has significantly grown its profits over the past several years by acquiring smaller companies and then drastically cutting costs to boost margins. In addition, AB InBev’s world-class scale and global distribution allows for a great deal of cost synergies.

For example, first came the enormous $52 billion merger that brought InBev and Anheuser-Busch together in 2008. Then, two years ago, AB InBev acquired the remaining portion of Groupo Modelo that it didn’t already own for another $20.1 billion.

The result is that from 2010-2014, AB InBev grew revenue from $36.2 billion to $47 billion, representing 30% growth over that period. Earnings before interest, taxes, depreciation and amortization (EBITDA) grew 35% over that period and its dividend more than tripled in that time.

SABMilller’s management, board of directors and its key investors are still fully on board with the $108 billion mega-merger with AB InBev. This would represent one of the biggest takeovers in corporate history, and due to an extensive regulatory review of antitrust concerns, it’s not likely to close until the second half of next year.

Until then, SABMiller is intent on growing earnings as much as possible. The company is undergoing a significant cost-cutting effort, designed to boost margins. SABMiller plans to deliver more than $430 million in annual cost savings by the end of this fiscal year.

If all goes according to plan, SABMiller and AB InBev are on the verge of becoming a global beer powerhouse.

You pay your bills every month on time. But are you receiving regular checks for growing income every month, too? If not, it’s about time. Beat the rising cost of living with a smorgasbord of fat, growing dividend checks arriving in your mailbox every month. It’s easy, and it only takes a few minutes. Click here to get started.