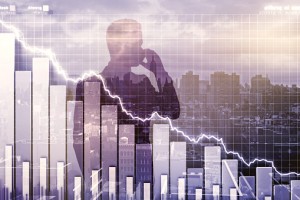 2016 got off to the worst start for the Dow Jones Industrial Average ever. Now that is somewhat arbitrary because calendar months don’t really matter. What matters is that we are in the midst of a correction, and many signs point to it worsening.

I went short several securities over the past two weeks. There are varying reasons as to why I’m selling short, and why I chose to short the securities that I did. For starters, I always have a pretty large cash position either available, or easy to obtain by liquidating short-term trades and holdings. So I have the flexibility for such a move.

Yet I also have enough market experience, and a sixth sense to intuit what is happening with the market, so I opened certain short positions. Here’s what I did, and why.

When the market started cracking right off the bat in early January, I went short the S&P 500 via the ProShares UltraShort S&P 500 (NYSE: SDS). The first reason to short the S&P 500 was that earnings revisions were reduced almost across the board for the entire year. This came on the back of my observation that there’s been a lot of financial engineering going on, with companies goosing up EPS numbers by buying back stock. Worse, they are using credit to buy back stock.

I also have been writing on a daily basis about how many stocks were not just overvalued, but insanely overvalued. I saw a market likely to be flat to down for 2016, and the opening days gave me reason to open my short position.

However, rather than just short the index, I went “ultrashort.” That means I am using a 2x leveraged ETF, so I get twice the performance (up and down) of the index. I did this because the S&P 500 broke through major technical support, and my favorite charting website showed tons of internal weakness.

There’s a tendency to focus on the big-cap names in general, and even more so during market crashes. However, just as mid-cap and small-cap names tend to outperform on the upside in the long term, they can be more susceptible than large-cap names to oversized declines.

That’s because many of the companies are not as mature, and not as solid with respect to balance sheets. The smaller names also tend to have a lot of debt to service as they grow. The key trigger here for me was the same set of charts I looked at, coupled with the overall struggling nature of the market.

The charts didn’t just show that support was broken, but that long-term trends now confirmed a bear market in this sector of stocks. Usually that means all the internals are falling and the 200-day moving average has crossed the 50-day average.

So I shorted via the ProShares Short MidCap 400 (NYSE: MYY). MYY stock gives me the purest exposure to this play.

This takes us to the small names I was mentioning, and the Russell 1000 is a great way to get in on the action with small caps. Small-cap names are more vulnerable? Since the Russell 1000 peaked last year, it is only down 10%. There’s a lot more room for it to fall and I think the market will take it down.

The volatility and weaker hands holdings Russell 1000 stocks make shorting the iShares Russell 1000 Growth (NYSE: IWF) the way to go with shorting an index. The other thing is that the Russell’s largest holdings, although they aren’t “large” in the absolute sense, include a lot of biotech firms. Biotech, especially small biotech, can get clobbered in this kind of environment, so any chance to short them is worth taking.

IWF is pretty volatile as it is, so I doubt I would move to a leveraged version of it.