Shares of the The Walt Disney Co. (NYSE: DIS) have caught fire again ahead of earnings, due Tuesday after the closing bell. That’s no doubt due to its recent run of very successful movies. The latest hits include “Captain America: Civil War,” “The Jungle Book” and “Zootopia.”

More blockbusters are coming too over the coming months and years as Disney continues to roll out movie hit after movie hit.

This is helping CEO Bob Iger move the company away from its reliance on media networks. Back in 2010, 68% of Disney’s operating profit came from media networks. In 2015, that dropped to 53%.

Disney’s movie studios, with the Marvel and “Star Wars” franchises, now comprise 13% of operating profit. That’s up from just 9% in 2010.

However, there is another part of the Disney empire that is often overlooked by investors, even though it is the company’s second-largest contributor to profits. 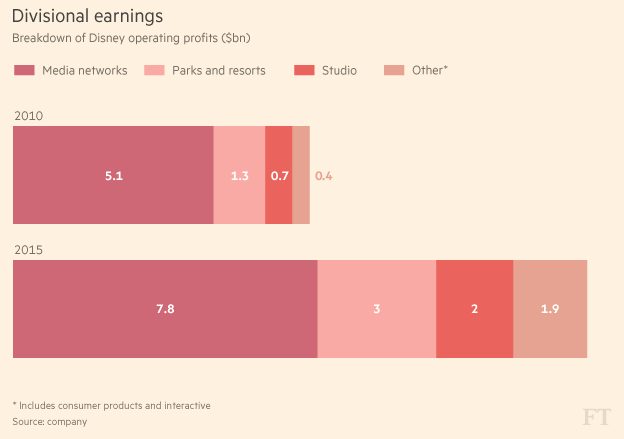 Disney’s parks and resorts division is about to get a very big boost.

On June 16, Disney will open the $5.5 billion Shanghai Disney Resort. That follows more than a decade of planning and five years of construction.

The park is 43% owned by Disney. The remaining 57% is owned by a local consortium, Shanghai Shendi. However, Disney does own 70% of the joint venture that actually oversees park operations.

Disney, as usual, is being very smart about the business of building and running such a park.

The Enchanted Storybook Castle is the largest castle in Disney’s history and celebrates all the Disney princesses. The Castle cleverly works in unique Chinese elements. As does the Garden of the Twelve Friends, which reimagines the Chinese zodiac with 12 well-known Disney characters. And the park menu will include all eight of China’s regional cuisines. Chinese favorites such as pork-stuffed mooncakes in the shape of Disney characters should be hot sellers.

The only drawback for frugal Chinese consumers may be the cost. Peak-hour tickets will cost $76 and off-peak tickets will run $57 for adult admission.

Nevertheless, I fully expect the Disney magic will work in a big way in Shanghai.

Howard Schultz, CEO of Starbucks (NASDAQ: SBUX), agrees wholeheartedly. In a recent conference call, Schultz said, “On June 16, we will open in China what will, in all probability, become Starbucks’ highest grossing retail store in the world virtually overnight. It is a stunning new Starbucks store at the main entrance of the new Shanghai Disneyland, a destination that may well become the No. 1 tourist attraction in Asia.”

So Starbucks may ride on Disney’s coattails in Shanghai.

As will another company – China Lodging Group (NASDAQ: HTHT) – which I happen to own shares of. This company’s growth has been astronomical. From one brand when the company started in 2005, it now has 12 brands ranging from economy to upscale.

China Lodging also has an exclusive strategic alliance with AccorHotels (OTC: ACCYY), the world’s leading hotel operator which has locations in 92 countries.

But even more importantly, China Lodging has a 25% revenue exposure to Shanghai. Many visitors to Shanghai Disneyland will be staying at one of China Lodging’s accommodations.

Nothing is ever a sure thing in investing. But China Lodging will very likely benefit from increased tourist traffic around Disney’s Shanghai park. This should give an already fast-growing company an additional turbo-charged boost.