At the beginning of 2018 you have a rare opportunity to vastly increase your income using what might be the simplest investment strategy ever.

For starters, the strategy that has outperformed the Dow Jones Industrial Average and the S&P 500 index significantly over the last 20 years and that should not be taken for granted. A proven, long-term strategy is hard to come by, yet most investors overlook the tried and true strategies in an ongoing search for the latest and greatest strategy.

Its performance speaks for itself.

So, what is the Small Dogs of the Dow strategy? And how does it work?

First, you must understand the Dogs of the Dow. These are the 10 highest-yielding stocks in the Dow Jones Industrial Average. The Dogs of the Dow strategy recommends buying these 10 high-yield Dow stocks at the beginning of each year and rebalancing annually.

Every year, the whole process starts over. Oftentimes, most of the stocks will remain on the list from one year to the next, simplifying things from a tax perspective (no gains or losses to report) and helping to lower commission costs.

But as I said before I have a unique alternative that is far more cost-effective and in most cases, more profitable than purchasing the five stocks that make up the Small Dogs of the Dow.

A strategy is similar to a traditional covered-call strategy, with one exception in the mechanics. Rather than buying 100 or more shares of stock, an investor simply buys an in-the-money LEAPS call and sells a near-term out-of-the-money call against it.

More importantly, the capital required is roughly 75% to 85% less than the cost of owning the stocks required to follow the Dogs of the Dow or Small Dogs strategy.

I started a LEAPS-based Dogs and Small Dogs portfolio at the onset of 2017 and the results so far have been . . .  incredible.

As an example, I’ll start with one of the stocks we expect will reside in the Small Dogs of the Dow portfolio in 2017 . . . 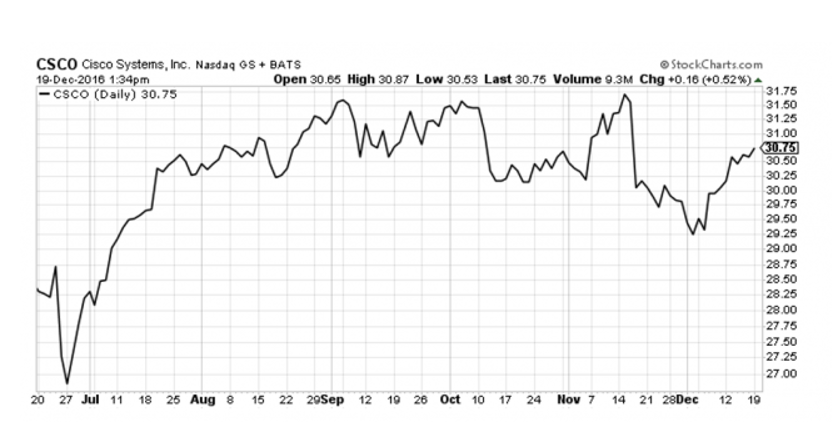 The next step is to choose an appropriate LEAPS contract to replace buying 100 shares of CSCO.

If we look at CSCO’s option chain, we will quickly notice that the expiration cycle with the longest duration is the January 2019 cycle, which has roughly 760 days left until expiration.

With the stock trading at $30.75, I prefer to buy a contract that is in the money at least 10%, if not more. For the options geeks out there, I like to buy a LEAPS contract with a delta of around 0.80.

We can buy one options contract, which is equivalent to 100 shares of CSCO, for roughly $8.15, if not cheaper. Remember, always use a limit order – never buy at the ask price, which in this case is $8.45.

I like to go out 30 to 60 days when selling premium against my LEAPS contract. Let’s sell the January 31 strike with 60 days left until expiration.

An alternative technique, if you wish to participate on a continued upside move in CSCO, is to buy two leaps in the stock and only sell one call against it. This strategy will increase your deltas and allow half of your position to participate in a move past $31.

No matter the approach, we can continue to sell calls against our LEAPS contract every month or so to lower the total capital outlay. But remember, options have a limited life, so when we get closer to the LEAPS contract’s expiration (typically around nine to 12 months) we will simply sell the contract and use the proceeds to continue our unique options strategy.