For months, Wall Street begged and pleaded for QE3.

A third round of government bond-buying – known as quantitative easing – was supposed to be just the thing to stabilize a sluggish U.S. economy and goose one more rally out of the stock market.

Instead, here’s what has happened since Ben Bernanke and company officially announced QE3 on September 13:

My colleague Andy Crowder saw this coming. Here’s what Andy wrote on September 12:

“The end effect of each successive QE seems to get dramatically more modest as the timeline gets dramatically more compressed. It’s like an infection that becomes more and more resistant to antibiotics. So when Ben Bernanke actually comes out with the highly anticipated QE3, it’s very possible the next move could be extremely modest … and could potentially lead to a sharp reversal.”

What Andy wrote later in the article now sounds even more prophetic:

“If (Bernanke) does decide to take this last shot, it’s my opinion that the injection will give the market one quick, final spurt and then send it spiraling down.”

That’s exactly what has happened. Stocks did get a nice two-day bump September 13-14 – the day QE3 was announced, and the day after. The S&P was up 2% in those two days.

The markets remained essentially flat for the ensuing month. But since this less-than-stellar third-quarter earnings season began, they’ve fallen off a cliff.

One final spurt, then a downward spiral. Just as Andy said.

Of course, by his own admission, Andy had some help. This chart of market behavior after every Fed stimulus effort since 2008 – QEs 1 and 2, plus Operation Twist and the extension of Operation Twist – told us everything we needed to know about their diminishing effect: 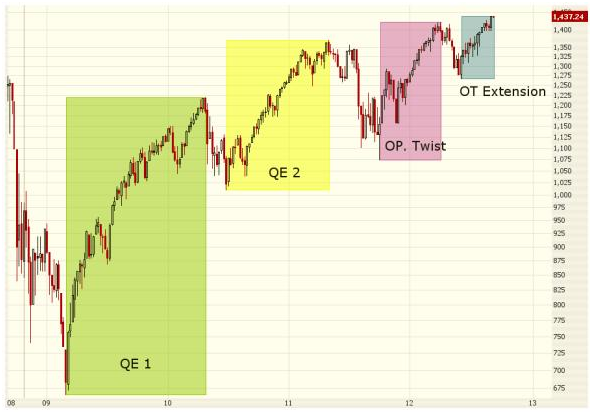 With each stimulus attempt, the impact on the market was less profound. Now, with QE3, the impact has been negligible.