The launch happened at NASA’s launchpad in Cape Canaveral, Florida.

It’s the start of a major initiative that could hand one little-known company $50 billion to  $80 billion in annual sales! 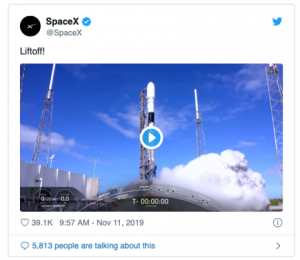 Two minutes later Falcon 9 reached an altitude of 174 miles. And the rocket deployed the 60 satellites for orbit around earth.

Just eight minutes after takeoff, the Falcon 9 had landed on a floating landing pad in the Atlantic Ocean.

This is part of the SpaceX Starlink project. The company plans to launch 12,000 satellites to bring high-speed internet to rural parts of the world.

Each satellite is the size of a small table. Yet the satellites can provide Internet speeds that are 50% faster than existing fiber optics.

The ultimate goal is to complete the project within seven years.

Once completed, the satellites will provide high speed and low-cost Internet access worldwide.

Last month, SpaceX announced that the company has applied to launch an additional 30,000 satellites.

The total cost of the project is expected to be $10 billion.

Yet SpaceX CEO Elon Musk says Starlink could generate $50 bilion to $80 billion in annual sales! And that’s an impressive return-on-investment (click here to profit with a “founder’s share certificate).

This happened this week. And it’s the future of commercial space.

Private companies are rushing to grab a piece of this market that Merrill Lynch says will be worth $2.7 trillion annually.

The smart money investors are jumping into the space business. And chances are very good that you’re still on the sidelines.

Today’s urgent briefing aims to bring you in on the ground floor. Because you can secure an insider’s stake for the bargain price of just $3.50.

Frankly, it’s the most exciting and biggest growth market for the next decade.