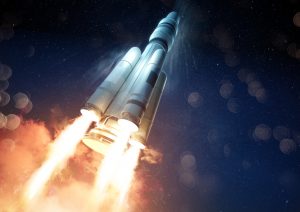 Here’s the best news – this industry is GOING PRIVATE. And that means a handful of tiny stocks are getting ready to takeoff – including my #1 stock for 2020.

Go here for details and to claim $3.50 IPO “Insider Shares.”

This overall space industry is expected to double.

At the same time, the United States government is slashing the NASA budget.

Instead, they’re turning to private companies to send people to and from the International Space Station, launch new satellites and destroy asteroids.

Here are some examples of NASA outsourcing space contracts:

Plus, SpaceX was awarded part of a $646 million U.S. Air Force contract. And the Department of Defense plans to issue another $10 billion of contracts in the next couple years.

This privatization of outer space is a once-in-a-lifetime situation.

That’s why the guys who founded Amazon, Google, Tesla Motors and Virgin Atlantic are jumping into this growth market.

Now, these big multi-billion-dollar companies aren’t investing directly in the space sector. Instead, these billionaire entrepreneurs are launching new companies.

Because they know the profits will be explosive. So, they’ve created separate companies to profit from the growth.

Until you discover how to secure IPO insider shares in one stock that’s capitalizing on the commercialization of space.

It’s your chance to invest alongside the billionaire investors in the space industry.

You’ll get complete details on this huge market that could be worth $2.7 trillion, according to Bank of America Merrill Lynch.