The stock buyback craze is in full swing. With the economy recovering and corporate profits steadily rising, companies have more cash in their pockets than ever before. Rather than invest heavily in hiring or research and development spending, many companies are returning their excess cash flow to shareholders. 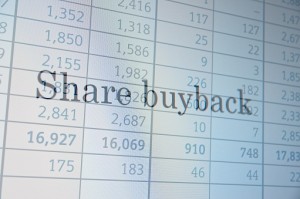 One of the most popular ways to return cash is through share buybacks. This is an increasingly popular practice for companies to use cash flow to buy back their own shares. In fact, The Wall Street Journal reported earlier this year that share buybacks reached $141 billion in April, a 121% year-over-year increase, and an all-time record for a single month.

Corporate stock buybacks are projected to reach $1.2 trillion this year, which would set a new record and shatter the previous mark of $863 billion back in 2007.

And yet, there are good reasons to be skeptical of all this share repurchasing activity.

When done properly, stock buybacks are supposed to increase value for shareholders. In theory, a company can use its profits to buy back its own stock. Once those shares are retired, there are fewer shares outstanding. That helps increase earnings per share, since the company’s future profits will be split among fewer shares.

That’s why many analysts advocate for stock buybacks, because they help grease the wheels for greater earnings growth. And, as opposed to dividends, which are taxed, stock buybacks are a tax-advantaged method of returning cash.

But many times, stock buybacks are conducted improperly. One such instance is when a company buys back a great deal of its own stock, but rather than being used to retire outstanding shares, it merely offsets the dilutive effect of stock-based compensation given to employees.

This is typically seen in the technology sector, where employees are awarded lucrative stock options and other stock-based awards. One classic example of this is Amazon.com (NASDAQ: AMZN), which spent $1.7 billion on stock-based compensation in the past four quarters. That was a 33% increase from the prior 12-month period.

This has caused Amazon’s shares outstanding to increase. At the end of last quarter, Amazon had 476 million diluted shares outstanding, up from 461 million at the same point last year. This practice dilutes the stakes of existing shareholders, and has a negative effect on earnings growth.

Another instance of when buybacks can do more harm than good is if a company levers up its balance sheet to buy back stock. Many companies have a lot of cash on their balance sheet, yet can’t access it because it is held offshore. This is again typical in the technology sector.

For example, at the end of last quarter, Apple (NASDAQ: AAPL) held $202 billion in cash, cash equivalents and long-term marketable securities on its balance sheet. The problem for Apple is that the vast majority of this cash is held overseas, and it would have to pay a significant repatriation tax to bring that cash home and return it to investors.

Therefore, Apple has resorted to taking out debt to finance its large share repurchasing authorization. Apple now has $47.4 billion in long-term debt, up from $28.9 billion at this point last year. While Apple has a strong enough balance sheet to sustain this rise in debt, an overly indebted balance sheet can eventually become a huge strain on a company.

Ultimately, stock buybacks are a lot like fire. When used properly, they can perform valuable functions and serve a positive purpose. But when used improperly, it’s easy to lose control, and they can do a great deal of damage.

To be sure, there are many companies that conduct their stock buyback programs the right way, which is to use them to effectively reduce the number of shares outstanding. That can be a very good way to increase earnings growth.

It’s critical for investors to dig deeper into each company’s stock buyback program to make sure its hard-earned dollars are being put to work in the right way.

Because when buybacks are done right, the payoff is worth it. See why right here.