Venture capitalist Bill Gurley of Benchmark Capital is one of the top investors in Silicon Valley. He’s backed such top startups as Snapchat, Dropbox and Uber. 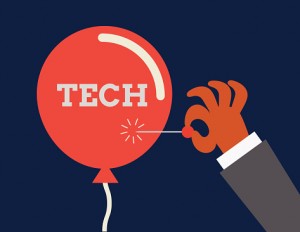 Gurley made a bold statement at The Wall Street Journal’s WSJ.D Live conference last month when he said, “There has been a mythos of stay private longer that I think is probably the worst advice that’s ever been given in Silicon Valley.”

It is certainly true: companies are staying private longer. In 1999, the average age of a company at its initial public offering was 4. In 2014, it was 11. Gurley is warranted in stating this is bad advice.

But, is it bad just for Bill Gurley and other venture capitalists? Or are there broader consequences for the market?

Irrational enthusiasm in the tech industry has been rampant for the past three years, with valuations of tech companies soaring. Many point to the rising number of “unicorns” as a sign of a new tech bubble.

Unicorns – private companies with valuations above $1 billion – were once a rarity. And perhaps, like their namesake, these startup unicorns are a mythical creature. Gurley stated that the company’s wealth is only on paper until a liquidity event. These private valuations that have been soaring have not experienced the scrutiny of the much harsher public market. When these companies finally hit the public market, we will witness just how magical these “unicorns” are.

First Data Corp. (NYSE: FDC) experienced a lackluster tech-IPO last month when it priced below its predicted range and still traded below its IPO price during its debut.

In addition to the higher and higher valuations, mega-rounds of funding – defined as any fundraising round over $100 million – are skyrocketing too. The number of mega-rounds has risen 125% since a year ago.

Why are these valuations such a problem? These companies are pricing themselves out of M&A and future financing rounds. A unicorn is becoming too expensive for an acquisition. If a unicorn tries to raise another round in the private sector, it will likely be forced to lower its valuation.

The argument to stay private longer is that private companies are under less scrutiny than those that are public. Instead of focusing on quarterly earnings, a private company can focus on long-term growth. However, companies like Amazon have proven that even as a public company investors still value long-term views.

The problem is really for investors like Bill Gurley who want to experience a liquidity event, or for employees of the company who have savings tied up in stock options.

Why This Won’t Be the Dot-Com Bubble Burst 2.0

The good news: if this is a tech bubble, it is Dot-Com Bubble Jr. compared to its 1999 counterpart.

Most importantly, these soaring valuations are happening in the private market. During the 1999 bubble, these companies were public and brought the stock market down with them.

Irrational exuberance in the public stock market that backed the ill-fated Pets.com IPO is not equivalent to private investors pouring millions into startup unicorns like Airbnb, which has traction and a proven revenue model.

While the valuations of the 2015 tech companies are inflated, these companies will not be like the online grocery company Webvan, which went from a $1.2 billion valuation to bankrupt in less than two years.

Investors need to brace for much smaller repercussions for their exuberance in the private market.

They’re owned by some of the wealthiest people on the planet. They share a few key similarities that distinguish them from 99% of equities. Even as the S&P keeps breaking record highs, they’re stillcrushing it. In fact, over the last ten years they’ve outpaced it by a colossal 390%. Find out more right here.