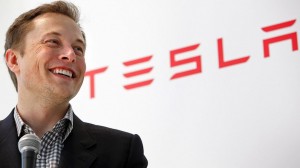 Building the gigafactory is a huge gamble for Tesla and its high-profile CEO Elon Musk.

In fact the Tesla gigafactory will be able to produce more lithium-ion batteries than all of the current factories in the world combined!

Tesla is only forecasted to sell 240,000 cars in 2020 when the gigafactory comes online. But the factory is capable of producing batteries to power 500,000 cars each year. The author of the article I read suggested that the gigafactory is a massive gamble on Tesla’s ability to boost demand for electric cars.

It is well known that Tesla and SolarCity (Nasdaq: SCTY) are – at the very least – friendly. Musk was involved early with both companies and remains the Chairman of SolarCity’s board.

Tesla features SolarCity solar panels in its network of Supercharger stations, a network that is rapidly expanding to meet the demands of Tesla’s customers. There are many examples of Tesla/SolarCity co-branding.

The Tesla and SolarCity story is really a story about the way Elon Musk sees the future.

The only piece that’s missing is the batteries.

While I have sold out of my Tesla and SolarCity positions due to valuation, I fully believe in Elon Musk’s version of where our energy industry is headed. Whether or not it happens any time soon, we will eventually run out of oil, natural gas, coal and uranium.

The end of those fuels may still be a long way away. But the energy that will replace them is already in sight. Elon Musk thinks that he has seen the future. And with the Tesla gigafactory, he is placing a huge bet that solar, Tesla and SolarCity are it.

You can begin collecting regular checks for gasoline… directly from the oil industry. A little-known government-guaranteed program pays average Americans regular gasoline rebate checks, regardless of income or employment status.