“Game changer.” That’s how many are describing the Tesla Model 3, the $35,000 electric vehicle that Tesla Motors (Nasdaq: TSLA) announced last night via Twitter. 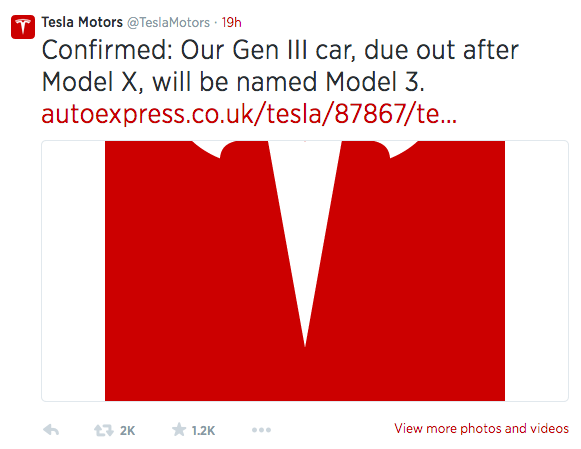 The story might be the only Tesla-related topic generating more attention than the Tesla stock price. Shares of the company are up 46% so far this year, 101% over the past year, 541% over the past two years and 1043% since its 2010 IPO.

The stock’s move over the past couple years has been nothing short of remarkable and this is the remarkable moment that the automotive world and investors have been waiting for.

An electric car for the masses, it seems, has the potential to change the auto industry forever.

What’s interesting is that the market’s reaction to Tesla’s big news has been, well, unremarkable. At last look the Tesla stock price is basically unchanged for the day.

Tesla isn’t yet profitable, so there isn’t a way to compare net profit margins. But we can compare it to other automakers by its gross profit margin – the measure of a company’s profitability before factoring in research-and-development costs, taxes and other expenses like marketing costs.

Of course, GM has its own special set of problems going on right now.

The real story here when comparing gross profit margins is that Tesla’s comes in at 25%, considerably higher than the other automakers.

Though this gross profit margin is high, Tesla continues to invest heavily in its network of supercharger stations and in research-and-development. Thus, the company has yet to turn a profit.

But Tesla’s gross profit margins suggest that, once it is able to scale back its research expenses to reap the benefits of these investments and its supercharger infrastructure investment, the company will be considerably more profitable than the average automaker.

I believe that the Model 3 will be hugely successful. I, for one, can’t wait until I get the opportunity to give Tesla my money to buy a Model 3. Unfortunately I’ll have to wait until the car goes on sale in 2017.

But at a price tag starting at $69,900, a significant portion of the population is already priced out of Tesla ownership. The $35,000 Model 3 will be a game changer for Tesla as it will transform it from a luxury automaker to an automaker for the masses.

I would argue that most investors already expect the Model 3 will be transformational for both Tesla and the auto industry. That’s why the stock hasn’t really moved on the news.

Investors haven’t been blindsided by the Model 3, investors have already priced it in. The game changing Model 3 merely justifies the already high Tesla stock price.

Yes.  That’s right. A bigger, better, beefier vehicle is rolling off the assembly line – an American truck that’s actually more efficient than the Toyota Prius.  Hey, it can even tow five of them. And it’s not a wimpy hybrid. It’s a 302hp heavy-duty beast. Yet, it only costs around $15 bucks to fill up! And you can travel 800 miles on one tank. That’s why we call it the “American Prius.” ONLY ONE COMPANY has the breakthrough technology for building this truck. And now you can share in their massive profits.