Owning gold is my favorite way to benefit from the goofy problems caused by our feckless leadership.

But another great opportunity is to go short long-term Treasury prices.

Boring right? Hear me out.

I wouldn’t be the first journalist or analyst to call shorting US Treasuries the trade of the decade. In fact, most if not all of my favorite gurus and market soothsayers have been making similar calls for years.

Our own Andy Crowder used that exact phrase in November of 2011.

The Wall Street Journal had a similar piece around the same time – this time focusing on long-term German and French bonds.

Bill Bonner over at the Daily Reckoning said something similar back in early 2010:

"So there is our Trade of the Decade: Sell US Treasury debt/Buy Japanese stocks."

My former colleague Bud Conrad at Casey Research made a similar call in 2009 – and published the same call in chapter 14 of his excellent 2010 book "Profiting From the World’s Economic Crisis."

So… what’s the relevance of this "trade of the decade" and how does it fit in with our commodity thesis?

"A weak dollar usually turns investor attitudes against holding dollars or investing in dollar-denominated assets like Treasuries, and that turns to higher rates to compensate for the loss in exchange rate.

Although there are many opportunities for investment, betting on rising interest rates seems especially attractive."

The real problem is that while the Fed and the Treasury have very little control over the gold markets, they have lots of control over what happens to interest rates, especially in the short term.

So as Bud says, "In time they’ll [the Fed and the Treasury] lose control of rates, but gauging how much time that will take is impossible."

So that’s where we’ve been for the past few years. Everyone has been licking their chops waiting for rates to inevitably rise. After all, rates have been at or near record lows for years. Every year, rates seem to fall further – and every year, people line up, ready to go short.

But of course, the Fed has fought tooth and nail to keep rates low – and they’ve succeeded.

Until about one week ago – when rates began to rise. 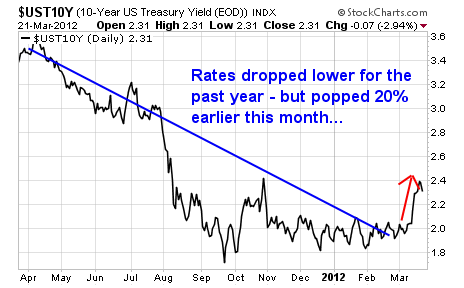 For clarity – when I talk about "shorting" Treasuries – I mean shorting the actual bond price. Bond prices move inversely to yield. 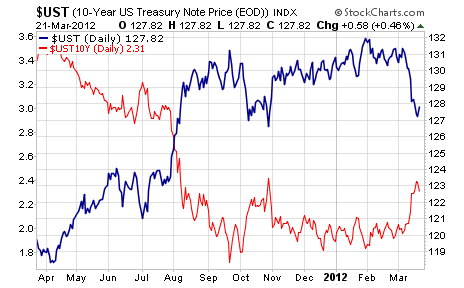 Is this the beginning of the "trade of the decade?"

But there’s a simple way to short bonds – you can just buy the Lehman 20+ year UltraShort bond ETF (NYSE: TBT).

It’s a double-short fund, meaning that for every percentage point bonds fall in price, this fund should gain 2%.

Conversely, for every 1% bond prices rise, this fund will drop 2%.

The problem is that if you had shorted bonds nearly any time in the last, say, 30 years or so, you would have lost lots of money.

Eventually, this trend will reverse course – and as all of my colleagues and cohorts have pointed out, shorting Treasuries will be the trade of the decade.