If you’re looking for the biggest gains in the precious metals space with the least amount of risk then you should focus all of your time and energy on emerging gold and silver producers.

Today I’ll discuss why I focus on this sector, as well as some of the keys to finding the best emerging production companies.

First off, what are ’emerging producers’?

They’re in the middle of the mining life-cycle that goes from early stage exploration companies up to big ‘blue-chip’ miners like Barrick Gold (NYSE: ABX) or Goldcorp (NYSE: GG).

The key difference between the big miners and emerging producers is that the increase in production for these smaller companies is extremely material in terms of how many ounces it will add to total production.

A large company might be increasing production at a couple of its dozen or so mines by 25 percent, for instance. That’s just not enough to move the needle for that company in a significant way.

I want to see that a large investment of time and money is about to hit the bottom line of a much smaller company since this is a catalyst that will move the stock.

To shareholders, emerging producers exhibit the greatest – and importantly, the most visible -improvement in company fundamentals. And improving fundamentals tend to have a very positive impact on share price.

In many cases these emerging production companies will soon begin to generate revenues for the first time. Actual earnings, once a distant dream, are soon to become reality.

I also look for excessive shareholder dilution from private placements and secondary offerings to be a thing of the past.

Press releases should be positive, digestible and easily understood by the average investor.

I also prefer the emerging producers over the explorers because mining companies that are still in the exploration stage take a ton of work to analyze and there is a lot of wiggle room for guess work and speculation. With exploration stage companies it’s all about how high the grade of ore might be, estimated capital required to get the gold and silver out and forecasting future sales.

We’ve all seen variations of the following headline for exploration-stage companies:

Most gold and silver mining companies with exploration projects will release this type of headline. But they cease to be the only headlines you’ll read when a mining company becomes an emerging producer.

Instead, with an emerging producer you’ll read;

Think of concrete earnings as a light switch – without earnings many institutional investors, like mutual, pension and hedge fund managers won’t touch the company. It is essentially in the dark to many of these major market-moving investors.

Emerging producers’ current revenues and earnings slice right through a lot of the speculation. They are easy to digest and readily understood. That makes buying the stock an easier decision too.

Emerging producers also always enjoy production growth – that much should be obvious. But increasing production paired with disciplined capital management, which was likely necessary to get a mine into production in the first place, almost always leads to decreasing cash costs.

This in turn leads to higher cash flow and significant leverage to gold and silver prices. And when the trend is higher for gold and silver, this leverage can mean potentially huge share price gains.

Let me give two examples.

Semafo (SMF.TO) is a gold company in Africa that began producing at its Kiniero Mine in Guinea in 2002. Two years later, in 2004, the Samira Hill mine began producing in Niger. And in 2008, Semafo opened its Mana mine in Burkina Faso, where management expects production to steadily increase beyond 400,000 ounces a year.

The chart of the company’s share price is testament to what three new significant mines meant for Semafo, and for shareholders. 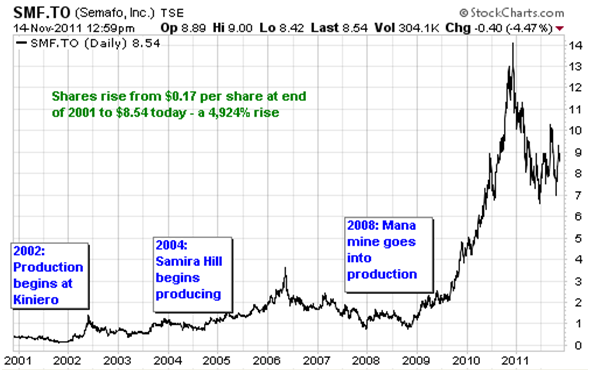 Endeavour Silver (AMEX:EXK) is another example. The silver mining company’s strategy has been to buy previously producing mines that were left for dead. It purchases the property, completes extensive exploration activities and rehabilitates the mine with new equipment.

The company purchased its first mine in 2004 when its stock traded for around $1.00

In 2009 the vast majority of ounces, about 2 million of the 2.7 million produced, were coming from the company’s Guanacevi mine. The average production cost was $7.00 to $10.00 per ounce.

The roughly 700,000 ounce balance came from the yet to be upgraded Guanajuato mine, which was acquired in 2007.

Major expansion plans have increased production at both of these properties in recent years, and production capacity at Guanajuato is now 260 percent greater than two years ago. Average cash costs in the last quarter were just $5.03 per ounce.

As with all ‘top down’ research strategies, there is a process of narrowing down the field to the best of the group. Semafo and Endeavour are no longer emerging producers, although I wouldn’t hesitate to recommend either of these companies at the right price.

But my advice: keep on the lookout – there are dozens of emerging producers out there, trading on both U.S. and Canadian stock exchanges.

Focus on those that have a mine entering production or one that has just begun to produce, and look for a material increase in ounces mined, revenues and earnings. These companies are the candidates that have the best chance to follow in the footsteps of previously successful emerging producers.