If you were asked to name the most widely grown cash crops in the United States, what would your top four be? Think about it for a few moments.

If one is corn, you’re right. And if you answered soybeans, you get another point. Nice job.

Third, but certainly not least, is wheat. Not as easy as the first two for me. But still reasonably obvious.

The fourth cash crop is more elusive. And to be honest, I don’t think I’d have gotten it right if I’d been asked this very question six months ago.

But that was before I came across a small agriculture company that is undergoing a dramatic transformation as its industry enters a consolidation phase.

Acquisitions, new proprietary products, licensing agreements and a potential new blockbuster product are all part of the story. Offensive and defensive maneuvers to both expand and protect market share are part of the game, too.

This may sound like a lot of action for a small agriculture company … and it is. That’s why it’s such an interesting story.

But back to the cash crop in question – crop #4 is alfalfa. If you knew the answer, you deserve a pat on the back.

Alfalfa’s relative obscurity is largely due to the fact that it’s not exactly human food, especially when lined up against corn, soybeans and wheat. There are a few potential benefits for humans. For example, studies have shown that alfalfa seeds can lower total cholesterol and “bad” low-density lipoprotein (LDL) cholesterol for people with elevated cholesterol levels. But for the most part it’s reserved as forage for animals.

In fact, alfalfa is the best forage crop for dairy and beef cattle and is also fed to sheep, horses and camels. It’s high in protein, calcium, potassium, iron, zinc and vitamins A, B1, B6, C, E and K.

But protein is the standout benefit, especially for dairy cattle farmers who love alfalfa’s 25% to 30% protein content for boosting milk production.

That’s all well and good for farmers. But for us as investors, the most important reason to care about alfalfa at this very moment is that global demand is on the rise.

And so is the price.

As is the case with many agricultural commodities, the demand drivers are population growth and the resulting need to squeeze more production out of every acre of farmland. Alfalfa hay is part of the solution.

Brian Gould at the University of Wisconsin-Madison put together the following data showing alfalfa hay prices over the past three years. The jump over the last two years is pretty astounding. 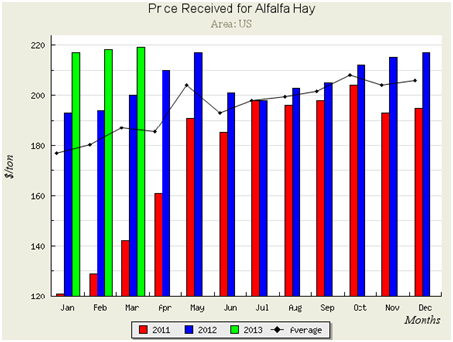 I don’t think it’s likely that alfalfa prices will continue to rise as much as they have over the past two years. At least I hope not or we’ll be faced with a massive increase in the price of dairy milk. But industry reports do point toward relative strength in the price of alfalfa through 2014, giving farmers enough foresight to plan how much of the crop to grow.

With demand for alfalfa on the rise and a favorable price environment to support established producers, I wanted to find high-potential public companies that have a foothold in the market. And I wanted companies that have more upside than diversified agriculture companies like Monsanto (NYSE:MON).

Last week I sent a research report covering my best prospect to Small Cap Investor PRO subscribers. If you’re interested in this story you can get a copy of the report with a trial subscription.

If you don’t want to stay on with the service you can cancel at any time. But you’ll still be able to keep the report, as well as get the details on all the other stocks currently under coverage.

I think it’s a compelling opportunity that is just far enough off the beaten path to still be largely unknown. But it’s getting close to the point where increasing publicity will bring more interest to the stock. That’s the sweet spot for entering a position … right before the heavy buying starts.