The growth of U.S. oil and gas reserves continues to accelerate at an astounding rate.

The estimated date for North American energy independence has just been slashed by four years. And it’s now expected that this important goal will be accomplished by the year 2018.

How is it possible that we’ve just trimmed four years off of such a huge milestone?

The short answer is that the supply and production picture just keeps getting better.  The following chart of EIA data shows exactly how this is estimated to play out over the coming decade. As you can see below, growth in U.S. and Canadian production are powering the trend. The U.S. will supply around 75% of the continent’s energy, with Canada and Mexico – two trusted trading partners – picking up the rest. 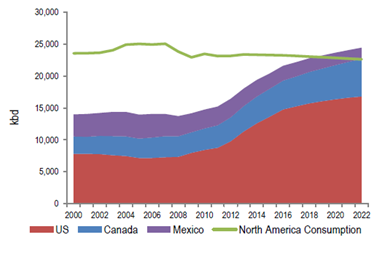 You’ll notice that consumption (the green line) isn’t expected to go up. In fact, it’s projected to decline a little. That’s because technology is making two of the largest energy consumers, power production and transportation, more efficient.

Rampant production growth of oil and gas is causing some to wonder what the potential drawbacks could be. A few readers have asked me specifically, “Won’t all of this new supply drive prices down?”

It’s a valid question, and one that I want to answer. There are two parts to consider.

Crude prices are likely to stay “high” because of the global market for oil. It is relatively easy to transport around the world so the “world oil price”, is the weighted average of the various benchmark oil prices (West Texas Intermediate, Dubai, OPEC, etc).

Supply disruptions around the world have been constant. Where and when they occur varies of course, but they’re pretty much guaranteed to continue. Recently, around 2.5 million barrels of daily production have stopped flowing from the Middle East and North Africa regions. That’s been offset by the increase in U.S. oil production.

Natural gas is a slightly different story since its more difficult to store and transport than crude oil. The supply glut in North America has crushed the natural gas price domestically. It’s currently around $3.60 per thousand cubic feet.

But in much of Europe and Asia, natural gas still costs over $10 per thousand cubic feet.

That low price is, of course, a challenge for some U.S.-based producers. But at this point, that’s already baked into their share prices. The most efficient explorers and producers with the best acreage are therefore attractive investments in my opinion. They have upside potential with production and price increases.

Also, the supply glut of natural gas creates a competitive advantage for many North American industries. Especially the ones that can save a ton of cash on energy costs – like the chemical, transportation and electricity generation industries.

So the bottom line on natural gas is that the supply glut has killed the price of natural gas. But that’s baked in to stocks today. And since it will persist, the low price opens up a number of sustainable competitive advantages for other industries.

The fact that North America is likely to achieve energy independence within the next six years is simply amazing. It’s a complete reversal from what we all expected a decade ago.

The investment implications are far reaching, and are likely to persist for years to come. My advice is to make sure you have solid exposure in your portfolio to this huge growth trend.