Thank goodness there are only a few days left before we are set free from this national-election purgatory. I reached my fill of the bickering and prevaricating months ago. I imagine most everyone else has too.

So does the end of the election mean your investment portfolio will be set free from purgatory as well?

In my last election update, I said the presidential election was settled. My opinion hasn't changed. What's more, my breakdown on how the election will be settled hasn't changed either.

The speculators concur. After the debates, Mitt Romney closed the gap on President Obama. Speculators on Intrade.com bid contracts on Romney up to $4.20. They have since reversed course, and the contracts are trading down to $3.50, which means the speculators believe Romney has only a 35% chance of being elected president on Tuesday.

Price of Romney Contracts on Intrade.com

The speculators at Iowa Electronic Markets (IEM) also continue to rank Romney's chances as slim. They, too, give the former Massachusetts governor around a 35% change of supplanting Obama. As I’ve said before, IEM has proven to be highly accurate. It got the final vote count in the 2008 presidential election right within seven-tenths of a percentage point.

Price of Obama and Romney Contracts on the Iowa Electronics Market 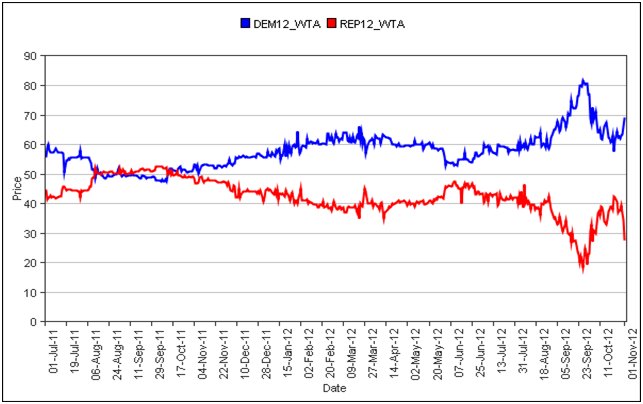 On Intrade.com, contracts are priced overwhelmingly in favor of a Republican majority in the House and a Democratic majority in Senate. I don't disagree.

But what does that mean for your portfolio?

So it appears we have a high probability of maintaining the status quo, and that means market risk will rise.

I say that because no progress has been made on the fiscal cliff – Federal Reserve Chairman Ben Bernanke's shorthand for the combination of tax increases (including dividend tax increases) and spending cuts that are scheduled to go into effect January 1, 2013.

I've spoken with many analysts and investors over the past few months, and I'm convinced the possibility of actually heading over the fiscal cliff isn't fully priced into the market. Too many investors believe everyone will make nice after the election and that Congress will steer us clear of the cliff with last-minute heroics.

I don't see it that way. Lost elections create an ethos of hostility and vendettas, not one of conciliation. This presents a dilemma for investors, particularly for income investors who don't own the right dividend-paying stocks.

Tax-efficient dividends and dividend-growth stocks have never been more important.

Should the election unfold the way the predictive markets and I expect, Ben Bernanke will likely keep his position as Federal Reserve chairman past 2014. That means even more money pumping from the Fed and a continuation of an unconscionable policy of zero-return interest rates.

This makes November an important month. Income investors will need to act soon to ensure their portfolios will maintain the distributions they've become accustomed to.

At High Yield Wealth, I've constructed a portfolio of dividend-growth and tax-efficient dividend payers that will help investors steer clear of the fiscal cliff and the Fed's reckless monetary policy.

Dividend-growth investing is an effective strategy for accumulating and maintaining wealth. Even low-yield dividend-paying stocks can prove highly profitable over time. I've actually been surprised at the speed at which wealth has accumulated in the dividend-growth stocks of the High Yield Wealth portfolio.

Should dividend taxes increase, dividend-growth stocks are able to at least partially offset the tax with a rising dividend stream, thus helping to maintain purchasing power.

The High Yield Wealth portfolio is also composed of tax-efficient, high-yield investments that won't be affected by higher dividend tax rates. Their efficiency resides in their business form.

With the right business formation, such as pass-through entities, investors are able to shield a higher percentage of the company's cash distributions from income tax. Thus they are still able to receive high income streams.

That said, economics always trumps taxes. I've written extensively in High Yield Wealth about the positive economics of the investments in the portfolio. That hasn't changed.

What's more, I expect the positive economics to hold, regardless of who takes the White House on Tuesday. I suspect the economics might be appreciated by more investors after the votes have been tallied.