A month ago I commented on the direction the November election was taking.

Since then, there has been a change. Not in direction, but in the magnitude and trajectory of the trend that was prevailing at the time.

Speculators – those putting actual money on the line – are more convinced than ever the election is settled.

In August, the two major speculator markets on politics – Intrade.com and Iowa Electronic Markets – had one presidential candidate ahead of the other. The speculators were gaming the leading candidate's chance of victory at 57%.

Now, with only five weeks to go until November 6, speculators have raised the percentage.   Intrade.com speculators say Barack Obama has a 75% chance of retaining the White House, while Iowa Electronic Markets speculators say he has an 80% chance. 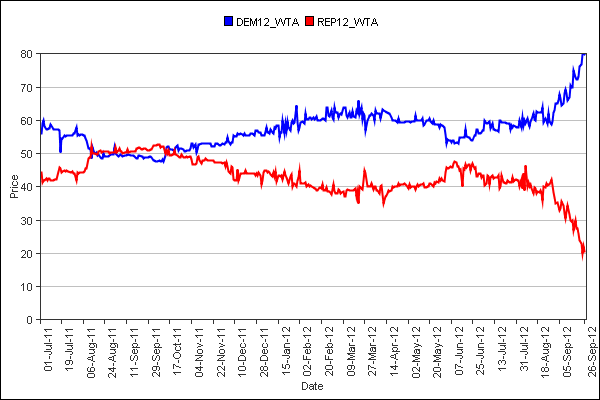 Speculators in both markets also remain convinced the Republicans will hold sway over the House of Representatives. The Senate remains undecided, with one party or the other holding only a slight margin.

In other words, it appears more likely that not much will materially change.

media shorthand for the combination of federal tax increases and spending cuts that are scheduled to go into effect January 1, 2013? In other words, should we look forward to more gridlock?

I know many investors like the idea of gridlock, where nothing gets done. But if nothing gets done, then next year will bring $500 billion in expiring tax cuts and automatic government-spending reductions.

Should that occur, the Congressional Budget Office (CBO) estimates the economy will be pulled down into another recession, with gross domestic product (GDP) shrinking 0.5% over the next 12 months. Concurrently, unemployment will rise to over 9% from today's 8.3%.

Spending cuts don't worry me. In fact, I have an alternative view: I think spending cuts would actually stimulate investment. Reduced government spending would greatly improve the deficit outlook.

The CBO forecasts the deficit will hit $1.1 trillion this year, or 7.3% of GDP. If government spending were allowed to run off the fiscal cliff, the deficit would fall to $641 billion, or 4% of GDP.

Yes, the probability of the economy falling into a recession rises, and recessions produce lower assets prices. But I would expect the recession to be short-lived and mild because of the reduced specter of Greek-like debt disaster.

This isn't simply blue-sky speculation on my part either.

Our friends to the north, the Canadians, embraced “austerity” with a vengeance 20 years ago. The country was a mess. Federal spending accounted for 23% of GDP and the debt-to-GDP ratio was nearly 80%. Sound familiar?

The Canadians spared no one, not even the sacred cows of education and national healthcare.

Fast forward to 2012 and Canada's debt-to-GDP ratio is down to around 34%. Federal spending has dropped to roughly 15% of GDP. Canada’s unemployment rate, at 7.3%, is a full percentage point below our own (and I believe our own unemployment rate is grossly understated.)

The spending portion of the fiscal cliff doesn't worry me; the tax portion does. The tax outlook for income investors is harrowing. Many traditional dividend-income investments could be severely disadvantaged.

In upcoming issues of High Yield Wealth I'll be focusing on taxes and other government action that impact income investors. I'll also be focusing on strategies investors can use to protect their income not only against impending tax hikes but also against the Federal Reserve's manipulation of the money supply and interest rates.

Times are always uncertain, to be sure, but they're even more uncertain for today's income investors.