Starting today, two of the world’s superpowers will begin to abandon the dollar as the world’s reserve currency. That’s a big deal, because for the past 70+ years nearly all of the business conducted across borders, between countries, corporations and individuals has involved the United States dollar as its hub.

That meant that if you were a shipping company in Japan buying steel from China, you conducted the trade in dollars. If you didn’t have dollars, you needed to buy them from someone else – but you needed them. Then once the trade was conducted, you could transfer your dollars back into yuan or yen.

But starting in the next month, China and Japan will conduct business in yuan and yen. The dollar will be out of the loop. That’s a huge development.

The dollar is losing its reserve currency status before our very eyes.

The dollar has lost nearly 98% of its value over the past 100 years, and that’s terrible news – but it pales in comparison to the loss of reserve currency status.

Such a predicament has given the United States a practical blank check. It’s meant that we can always print our own currency to pay for imported goods without worrying about a currency crisis, because the entire world needed dollars to conduct business. There was always demand to be sucked up by our trade partners and their trade partners.

Imagine having such a power. You and you alone can create a currency that EVERYONE must use to conduct trade. Why would you ever constrain the creation of your currency if everyone wants it? You wouldn’t. You’d print as many dollars as people wanted. You’d buy everything you could. And you wouldn’t care too much about the relative value of each dollar. It just wouldn’t matter.

But now that deal is starting to unravel. China and Japan, the third- and fifth-largest economies by GDP in the world, are now beginning to abandon dollar-based trade with each other.

And yet I’ve only seen token coverage of this monumental, historic event. No headlines. No stories above the fold or even on the front page of any major newspaper. The Wall Street Journal published a story yesterday with the title, “Japan, China Currency Deal Symbolic Step; Broader Benefits Remain Unclear”.

Of course, anyone can read between the lines. The benefits are quite clear. China and Japan no longer have to accumulate a unit of account (the dollar) that is a liability of the most broke entity in the history of the world (the United States government).

If the Chinese and Japanese can stop the inflow of dollars, and also deleverage their considerable dollar holdings, then they can stop worrying about dollar insolvency. China and Japan are just two of the early countries heading for the exits.

The main topic of a meeting between Brazil, Russia, India, China and South Africa (the BRICS nations) is an agreement to begin settling all contracts in their own currencies – cutting out the dollar further.

According to an article published in the Economic Times last week, “India has proposed the idea of establishing a Brics bank.”

We’ll look back at these early warning signs as obvious milestones in the dollar’s decline.

But as the chart below reveals, the end of world reserve currency regimes happens about every hundred years or so. 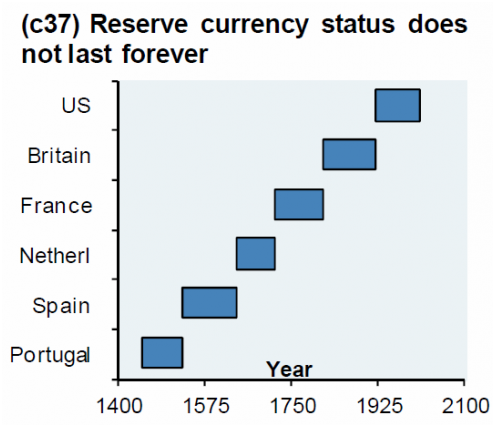 It’s neither unusual nor does it mean the end of the world for the country that loses its status.

Unlike many investors, I see the end of dollar hegemony not as a calamity to be feared and fought against, but as an inevitability to prepare for.