I’ve flirted with the idea of dedicating each Friday’s
edition of the Resource Prospector to more humorous
topics. But it’s tough to be appropriately reverent about something as
serious as our money while at the same time being humorous.

And to be honest, not many of the current topics in the
resource sector are especially hilarious.

For instance: there’s currently some degree of argument over
whether we’re currently experiencing inflation or deflation. I can’t think of
a more non-funny topic. If they say that comedy = tragedy + time, or that
comedy is tragedy that happens to someone else, then it doesn’t seem like
there’s much opportunity for jokes. After all, deflation or inflation is
happening to all of us all of the time, so no matter how tragic it is now,
it’s likely to be at least as tragic later.

Oh well, maybe I’ll find something appropriately funny for
next week. In the meantime, if you have any good jokes based on economics,
investing or politics, feel free to send them my way:
[email protected]

On the topic of
inflation vs. deflation:

I haven’t seen prices drop – and according to the Bureau of
Labor and Statistics’ own Consumer Price Index, prices across the board for
2010 have been flat to slightly higher through June 30th.

Another measure of inflation/deflation is the velocity of
money – measured most broadly as the Federal Reserve’s M1 Money
multiplier: 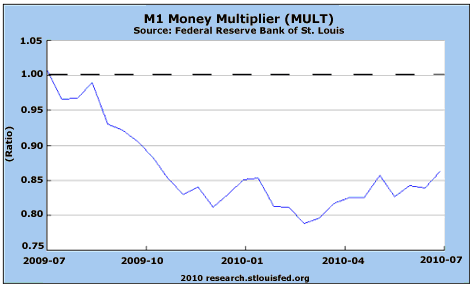 This chart shows the speed at which money flows through the
economy – and right now, money simply isn’t flowing from the Fed through
banks and into the marketplace. That’s a deflationary signal.

I firmly believe that the Fed is in a suicide pact to
prevent deflation which will eventually result in epic inflation – but until
then, we’ll likely see some mild deflation. 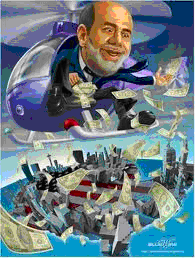 But let’s assume the worst case scenario – that I’m
completely wrong, and that
we’re in for many long years of deflation, not inflation, and prices will
fall, not rise. Maybe Ben Bernanke re-writes his dissertation on the topic
and does a 180. Maybe he lands the helicopter and starts sweeping dollars
back into the Fed’s coffers.

Well, fortunately for gold and silver investors, economics
is not a simple if-then Boolean logic problem.

According to a recent study from JP Morgan (NYSE:
JPM) gold and silver both outperformed the broad market during the
Great Depression, one of the worst deflationary periods in US history: 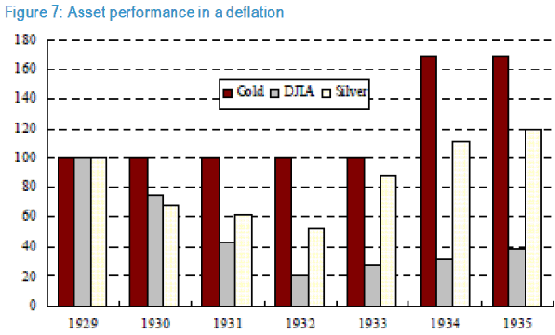 Here’s the relevant quote from the JP Morgan report:

“The performance of silver gives us confidence that
precious metals are likely to outperform the general markets in a downturn.
In a really tough deflation, the absolute price levels of the metals could
weaken, even as they outperform most other sectors.”

I found another, older paper written by Sam Hewitt, a Ph.D
and Certified Financial Advisor. He wrote the paper in 1996 for a firm called
Sun Valley Gold Company – so it’s best to take his findings with a grain of
salt, but I found the paper to be useful in answering why gold and silver
might outperform during a period of deflation, when you’d expect the
opposite.

“In historic US deflations, individuals had the choice
between paper currency or gold as hoarding vehicles. The historical record
demonstrates that loss of confidence in the issuer of paper currency is often
a sufficient reason for individuals to choose gold over paper
currency.”

So, it’s precisely because people lose faith in currency
during deflation that gold and silver rise – or at least don’t fall as much
as other assets.

The problem with deflation, I’m sure Ben Bernanke would tell
you, is that people hoard capital, which has a chilling effect on growth,
wages and eventually prices. And when people think of hoarding, they tend to
think of gold and silver as good places to hoard capital.

It’s counter-intuitive. You’d expect prices of gold and
silver to fall, just like prices of every other asset. But it’s not the
case.

So, even though I’m “hoarding” gold and silver anyway
because I fear inflation, it’s good to know it will hold up even if I’m
completely wrong and that deflation is coming down the pike.