We’ve been receiving numerous emails from customers wondering about domestic oil production from the Bakken shale in North Dakota.  Because this productive region is only in its infancy, I thought you might be interested in a research report on companies in the region.

If you’ve paid any attention at all to the domestic oil and energy market in recent years, you’ve heard of the Bakken oil formation. It’s a giant 25,000 square mile mass of oil and gas-bearing rock wedged between (and under) Saskatchewan Province, Montana and North Dakota.

The Bakken Boom caught fire in 2007 and raged through 2008 as oil prices hit $147 per barrel. Since then the price of oil has cooled off, but the Bakken oil production story has only gotten hotter.

It has completely revolutionized, and revitalized, the oil industry in the U.S. 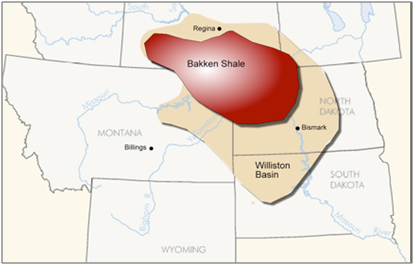 North Dakota in particular has benefited tremendously. Seasonally adjusted unemployment is only 3.5%, compared to the national average of 8.6%, because of the Bakken Boom.

Reports of how much oil the Bakken holds are literally all over the map. The USGS says the formation could hold enough oil to run the U.S. for 10 years, or up to 160 billion barrels of oil.

Point is – there is a lot of oil and a lot of companies vying for drilling rights. In the wake of the $4.4 billion Brigham Exploration buyout, courtesy of StatOil (NYSE: STO), the tight-oil acreage situation in the U.S. is unlikely to ease.

To put the opportunities in context … Brigham received more than $11,000 per acre for its Bakken land. Yet some of the smaller drillers are currently valued at between $2,000 and $7,000 per Bakken acre. That’s a sizeable discount.

Companies that have productive wells – and developable property (at a reasonable cost basis) – are extremely attractive targets for investors right now, even though the story of the Bakken’s potential is really nothing new.

Oil and natural gas were first discovered in the Bakken during the middle of the 20th century. While some wells have been running for more than a decade, most of the oil was not economical to recover because of a thick rock layer above the oil.

But with a ‘make the equipment and the oil will come’ attitude, engineers finally figured it out. North Dakota has been gushing oil ever since.

Around 200 drilling rigs are currently operating in the area. Everyone is looking for more rigs, with at least 10 to 30 more to be added every quarter.

According to the North Dakota Department of Mineral Resources, production in the state is up four-fold since 2005, to 460,000 barrels per day.  And it’s projected to keep on rising. 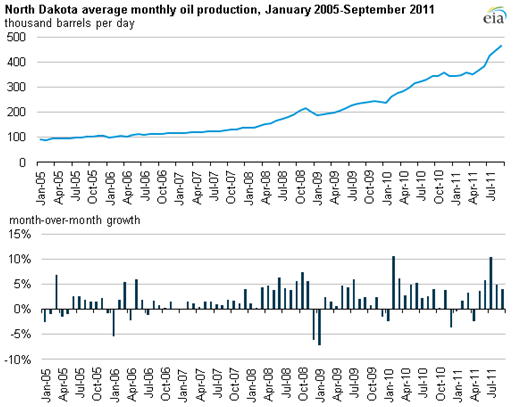 Undoubtedly the picture for future oil production in the Bakken is pretty rosy.  But it’s not all blue skies and pipelines in the Bakken. Oil exploration and development is a boom and bust business. So stick to companies that have significant new wells coming online over the next 12- months to limit downside risk.

You can get exposure to the Bakken with Northern Oil and Gas (AMEX:NOG) and Kodiak Oil and Gas (NYSE:KOG). With market capitalizations north of $1.5 billion, both have clearly been Bakken success stories and should continue to grow as the region is further developed.

Without a doubt, however, the larger potential gains lie with the still relatively unknown smaller Bakken players. These are the companies that have either just begun to generate revenues from oil production or are expected to generate revenues within the next 12 months.

Typically, production is a catalyst for share price gains, as is an increasing well count. Stick with those companies that have both and you’ll have a good chance to profit from the Bakken Boom.