What's the real cause of hyperinflation?

Oh boy, I know I'm wading into dangerous territory already. People either hate you or love you for even mentioning hyperinflation, and though many people in the "gold-bug" crowd see hyperinflation as some kind of eventual dream to come true – I have no illusions that such an event will be sunshine and lollypops.

As I've written before, inflation can be a nightmare, even for people who are adequately prepared for it – as in the case of folks who had their gold seized by FDR in 1933.

When you mention the word hyperinflation, everyone immediately thinks of two scenarios:

For some perspective, the Weimar event, though it might be the most famous since it paved the way for a German populous angry enough to elect Adolf Hitler to power, is by no means the worst hyperinflation.

But take a look at how quickly and drastically Weimar Deutsche Marks lost value: 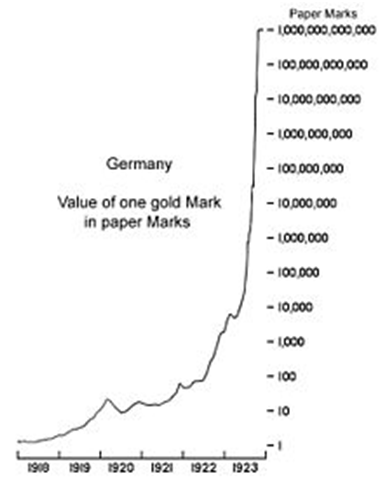 In any event, any type of hyperinflation means the total destruction of currency value. And people usually have 2 main theories as to why hyperinflations occur.

You might hear that money-printing was the root cause for both Zimbabwe and Weimar hyperinflations. A slightly more sophisticated inflation student might claim that money-printing has little effect on inflation until and unless "money velocity" upticks – when people try to spend their devaluing currency en masse.

We certainly saw both money creation and velocity in these two examples.

And while those two ingredients are necessary for a hyperinflation, they're not the most important.

The real root cause of this type of currency crisis is neither money printing nor velocity.

Or rather, the lack thereof.

When people lose confidence in their currency – whether there's money printing, high velocity or not – it tends to lose its value in a hurry.

So…to go further down the rabbit hole – why do people lose confidence?

Today in the euro-zone, there's certainly plenty of money printing. And while we have yet to see the type of rabid "velocity" as people seek to rid themselves of euros like hot potatoes, the confidence in euro-zone politicians is definitely on the wane.

The devaluation of principles is well underway. Ideas like sovereignty, democracy, and fairness are burned at the pyre of euro-salvation. The very due process of law and legality are bent and twisted to save a currency!

How much confidence do Europeans have left in euro politicians? The devaluation of this confidence will eventually hit a level where no one believes the euro's keepers are capable or willing of fixing anything.

Tomorrow, (July 4) is a market holiday, so you won't receive a daily issue of the Resource Prospector. Have a safe and happy holiday.