The gold bear market lingers on … with no clear end in sight.

Gold prices have fallen 28% since October, dipping below $1,300 an ounce for the first time since 2010. The decline has accelerated in recent months, totaling 20% since the beginning of April.

This is not the gold we’re used to – the precious metal that rose faithfully every year for the last decade. Gold’s demise can be partially blamed on the strong performance from the stock market. Despite a recent pullback, stocks have advanced 17% since November, knocking down record highs like bowling pins along the way.

Investors haven’t had much to fear. Or at least they haven’t acted like they’re afraid of anything. In the absence of volatility, investors have little use for a safe haven like gold.

But that’s not the only reason gold is tanking.

After all, stocks performed extremely well in 2009-2010, and gold prospered. Just last year, stocks advanced 13% while gold shot up 7%.

Stock performance isn’t what usually determines which way gold is going. But the dollar is.

Historically, gold has moved inversely to the value of the U.S. dollar. Take a look at this 10-year chart: 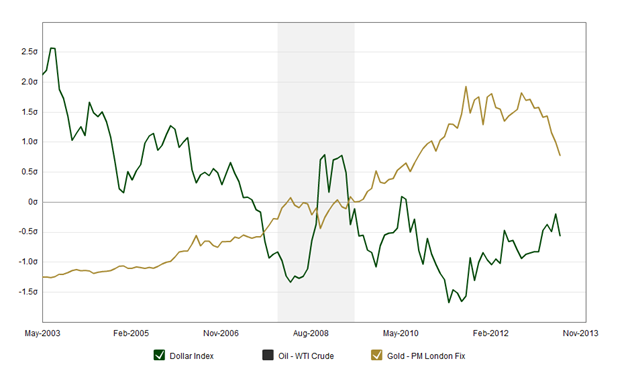 Lately, the dollar has been making a comeback. And as usual, gold is tanking.

However, the timing of the dollar’s resurgence is a bit curious. As most of you probably know, we’re in the midst of QE3, the Fed’s third attempt at stimulating a sluggish U.S. economy through bond buying. In the past, Federal stimulus efforts have led to a devalued dollar.

It makes sense. By flooding the market with $85 billion per month in bond buybacks, the value of one dollar generally dwindles. That’s what happened in QE1 and QE2, when the U.S. Dollar index declined by an average of nearly 4%. Meanwhile, gold flourished, gaining in price by an average of 24.5%.

This time, however, the opposite has happened. Since Ben Bernanke announced QE3 last September, the dollar has increased 4%, while gold has plummeted.

The yen is mostly to blame.

The dollar has become the world’s strongest currency in recent months – basically by default. To fix its own struggling economy and combat deflation, Japan enacted its own monetary easing policies, thus grossly devaluing its own currency, the yen. The yen is the cheapest it’s been relative to the dollar in almost four years.

The Bank of Japan expanded its asset purchase program by 10 trillion yen – the equivalent of $126 billion – back in September, just one week after QE3 was announced. The effect on the yen was profound, and the dollar began rising rapidly against the yen.

Perhaps not coincidentally, gold began tanking just as the dollar was advancing against the yen. Check out this chart courtesy of StockCharts’ John Murphy: 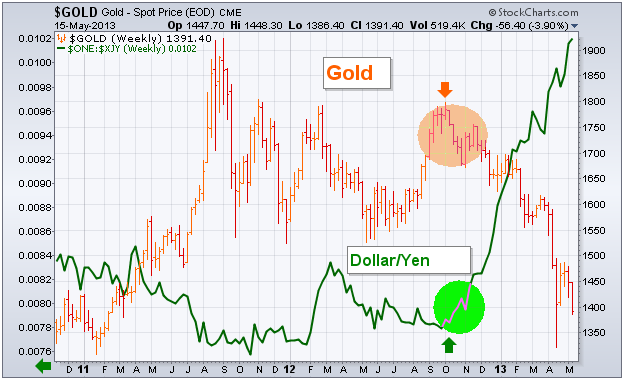 That doesn’t look like a coincidence. Add in the fact that monetary easing in Europe has also devalued the euro, and suddenly the dollar looks like the most valuable piece of paper in the world again – even in the midst of America’s own quantitative easing.

In essence, rampant monetary easing in some of the world’s largest economies has lowered the currency bar to abnormally low levels. Compared to itself, the U.S. dollar doesn’t have the same value it did before QE3 began. Compared to other dwindling currencies, however, the dollar is as strong as it’s been in years.

That dollar strength – and yen weakness – is weighing heavily on gold prices right now. A turnaround in gold may thus depend not on when Ben Bernanke says it’s time to pull the plug on QE3 … but when the Bank of Japan puts the brakes on its own monetary easing.