"We continue to be of the opinion that the real driver of the oil market last week and this week is the lack of trading volume in the futures market and not really the lack of oil supplies," said Olivier Jakob of Petromatrix in Switzerland.
This is yet another example of the bearish sentiment toward oil prices that’s rampant in the analyst community. Nobody wants to admit that the current supply and demand relationship is temporary. Nobody wants to acknowledge that the world faces some tough decisions in the months and years to come regarding energy supplies.
The era of cheap oil is over. Sure, we could maybe see oil in the $60’s again. But it’s pure folly to expect that oil prices might remain there for any length of time.
*****Right now, global oil production capacity—not actual production—is around 94 million barrels a day. As you can see from this chart, actual production is currently between 84 and 85 million barrels a day. Even when demand was peaking in 2007 and 2008, supply only reached 87 million barrels a day. 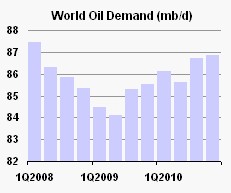 You may recall that it was the near parity of supply and demand that pushed oil to $147 a barrel in 2007. It seems clear to me that we are quickly approaching a similar situation. And yet analysts continue to deny the fact.
*****Now, the world can produce more than 87 million barrels a day. But not a lot more. And since we know that non-OPEC supply is maxed out, it’s going to be up to OPEC to make up the difference. Can we count on OPEC to keep an adequate cushion between supply and demand? Or will the lure of $150 a barrel entice OPEC to keep a lid on production and rake in the cash?
I think I know what I’d do…
*****In the wake of the financial crisis in Dubai, I wouldn’t be surprised if there were more Arab states with looming cash flow problems. Higher oil prices would certainly be a fix for any cash crunch.
The reality of higher oil prices is inevitable. And I believe your investments in oil and other energy sources will be among the best performers in 2010 and beyond.
If you’re ready to profit from the changing dynamics of the world’s energy use, plus get the details on a huge profit opportunity from the $1.16 oil sands stock I’m recommending, you will want to check out my Energy World Profits advisory. You can get the details on how to try this service by clicking HERE.
Published by Wyatt Investment Research at www.wyattresearch.com