Sellers hit Apple hard in October, dropping the stock by more than 30% from the September $701 peak. Though it didn’t seem possible a few months ago, Apple’s recent decline has many investors worried that the good times may be long gone.

Honestly, the bad news has piled high during the past month. First, Apple botched the iPhone 5 launch. In fact, the aftermath included an apology and the firing of a few key employees.

Then the iPad mini underwhelmed customers. The product was decent, but many analysts fear that it will only serve to take away from iPad sales.

Finally, to add insult to injury, Apple allowed Google maps back on its phones this December. In the first 48 hours, the Google maps app for iOS was downloaded more than 10 million times.

Throw in some market weakness thanks to the EU and the U.S. fiscal cliff and – wham – a 30% decline to Apple.

Though the decline has been severe (and the corporate news negative), Apple is in an amazing position to profit from two of the fastest trends in hardware technology.

Despite the recent depreciation in stock value, the company stands to clean up from two of the biggest trends in technology – tablets and smart phones. Data presented by Barron’s showed that smart phones have clobbered PC growth since 2008. Also, unit total and total value of smart phone sales eclipsed that for PCs for the first time last year. 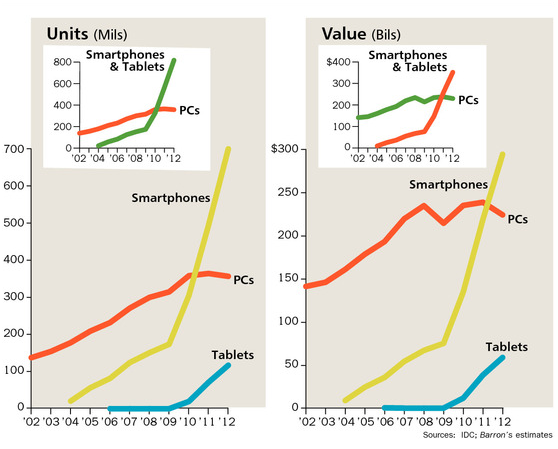 There’s no doubt the “smart phone revolution” stemmed from Apple, which sold more than 39.9 million iPhones in 2010. Apple increased that amount to 72 million units in 2011 and nearly 125 million iPhones during 2012.

In addition to being the king of smart phones, Apple holds the crown in the tablet market – a segment that may overtake PCs soon. Though tablets arrived late to the party, 100 million of them shipped last year (PCs were below 400 million units). In fact, Apple alone has sold more than 100 million iPad tablet devices during the past two years.

The future direction of smart phones and tablets is obvious. And Apple is one of the few companies in a position to profit from that expected growth. The stock may move lower or wiggle around $515 for another few weeks or months. However, the company is in too good a position and the shares are too cheap to stay this low for an extended period.

Apple isn’t the only company making money hand over fist because of the smart phone/tablet trend  … we’ve uncovered several more stocks. In fact, two are sitting in our Top Stock Insights portfolio right now. More information about our investment service and our investing strategy for 2013 is available by clicking here.