Your Exchange Traded Funds (ETFs) could make you broke.

You should know a few things about ETFs that you’re not likely to read in any prospectus or SEC filing.

First off, ask yourself, “Why do ETFs exist?”

You might think that they exist to make it easier for investors to buy certain similar assets with just one purchase instead of many – like a cheap mutual fund.

Or you might think that ETFs let you buy foreign or exclusive assets you wouldn’t normally be able to purchase – like foreign bond or timberland ETFs.

But you’d be wrong on both counts.

ETFs weren’t created by Wall Street out of the kindness of their hearts – to let you invest in a different way.

ETFs were created to line the pockets of the people who create ETFs!

And it’s true that many ETFs can be useful and profitable – just like stocks, mutual funds or any other investment.

But you first need to recognize that some ETFs only enrich the folks who sell them – and the only way to profit from these certain ETFs is to sell them too. And most investors should simply avoid them.

Before I reveal the top three ETFs I think you should avoid, let me give you a quick checklist that should help you avoid the wrong ETFs in the future.

Now that you have a few of the warning signs in mind, let’s take a look at a few of my least favorite ETFs in the commodity world.

1. The United States Natural Gas ETF (NYSE: UNG). With natural gas prices carving out new lows nearly every quarter for the past three years, it’s been easy to lose money in natural gas investments. But UNG has perfected the art of losing money. Since 2008, natural gas prices dropped 78% – but UNG has lost over 95%! 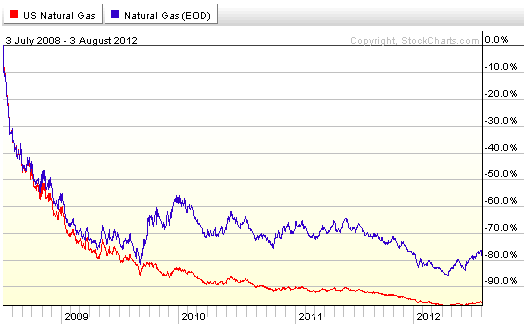 And just to keep itself listed, UNG’s managers have had to reverse split the fund time after time. That’s because the NYSE has a listing requirement that any stock or fund has to stay above $1 a share. UNG has come close to being delisted because of this requirement several times in the past 24 months.

Reading the prospectus, we find out that the fund holds over 40% of its assets in government bonds or government bond securities. Seems strange, right?

2. The United States Oil Fund (NYSE: USO). This fund is run by the same management as UNG, so it’s not much of a surprise to see that it has underperformed its asset (oil) as well. It’s a $1.34 billion market cap fund, and for its underperformance, the fund managers collect a 0.65% expense ratio every year. That’s almost $8.5 million! Pretty neat that you can run a fund with a terrible performance and still clear millions of dollars every year.

3. The iPath Global Carbon ETN (NYSE: GRN). In this case, it’s actually an Exchange Traded Note, but for our purposes, that’s close enough to an ETF. And specifically with this “note,” it’s just a plainly bad idea. The fund seeks to benefit from the increased usage of carbon credits. It assumes that carbon units will have some value in the future – despite the fact that these credits have no real value. The entire holdings of this security are “European Union Allowances” and “Certified Emission Reductions.” Sounds to me like they’re another failed fiat asset that governments want to pass on to citizens. I’m not buying it, and you shouldn’t either.