Stocks are falling and investors need to start picking safety stocks. Johnson & Johnson (NYSE: JNJ) has been a reliable source of health protection that consumers have turned to for more than a century.

But the company has done more than heal personal injuries. This defensive income stock has cured many people’s financial woes.

Despite a recent run-up, the stock remains cheap. The company is in a recession-proof industry and the shares pay a 3.7% cash dividend. Those are the three strongest reasons why you should buy the shares today.

The company is a model of durability. More importantly, JNJ makes products that people need to use every day, and occasionally in emergencies. It is the world’s largest supplier of medical devices, sixth-largest consumer health company, and eighth-largest pharmaceutical company. Many of its products are also household names – BAND-AID, Neosporin, BENGAY, Listerine, Tylenol and Rolaids.

If you’ve ever experienced a bump, bruise, scrape, cut, headache or tummy ache, chances are that a Johnson & Johnson product relieved your discomfort.

Because of the defensive nature of the healthcare industry, JNJ stock held value well during the 2008 global recession. Although the shares declined from about $60 to $45 that year, the stock was back near $60 again by December 2009.

In June, the stock managed to set a new record as it blasted above $66 following news that it would acquire Synthes for $19.7 billion. In this deal, management showed shareholders that the company had offensive and defensive characteristics.

The acquisition was a big move and it should provide healthy earnings for the next few years. The growth mentality is a direct contrast to other healthcare sector companies, which typically report slow growth.

Though it would be remiss to lump JNJ with high-growth companies such as Apple (NASDAQ: AAPL), the stock could be in line for another rally. At $67, the shares trade at only 13 times the $5.14 2012 EPS estimate and 12 times the $5.50 EPS estimate for 2013. Thus, the shares appear undervalued based on analyst estimates.

That may seem like a fair multiple for a defensive stock, but it’s likely a tad low. Keep in mind that most companies with a reliable earnings history command a 15 P/E multiple, which is in line with the long-term average P/E of 15.5 for the market.

The low multiple and long-term financial health should result in a better stock price over time. The shares remain in a strong bullish channel (double blue lines below). So long as channel support is not breached near $62, investors should expect the shares to continue higher into the mid-$70s. 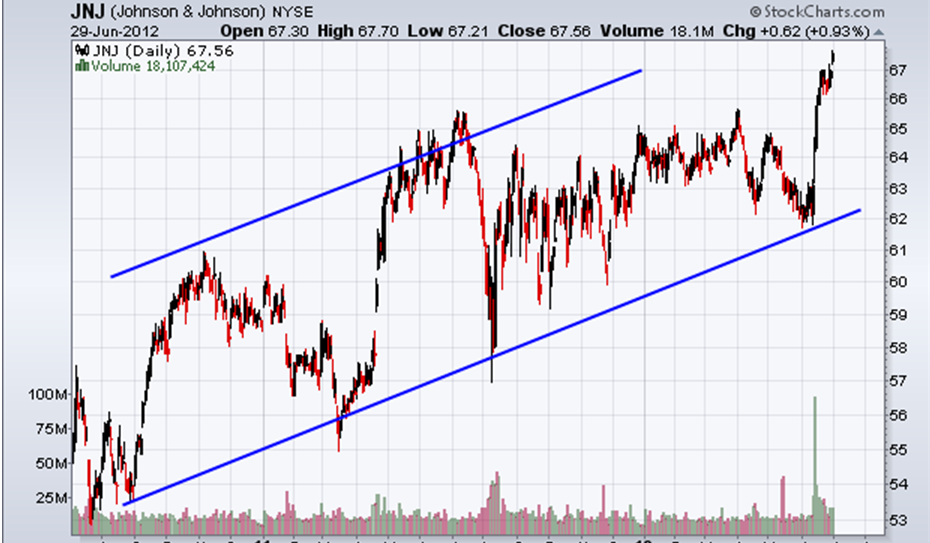 As you wait for what I believe is an inevitable move higher, you can collect a very generous dividend. JNJ pays around a 4% cash dividend, which is a record yield for the stock. Although it happens to be a record yield, a liberal dividend is nothing new. In fact, management has increased the payout for 49 years.

JNJ is a stock for everyone. Its exposure to a defensive industry keeps the financials steady. In turn, the steady financials support the stock price, which at the current level is too undervalued. It may take months for the rally to $75 to occur, but the shares are still a good buy because they come with a 3.7% yield. Johnson & Johnson is a stalwart blue-chip company, and one that every long-term investor should consider for his or her retirement portfolio.

Equities mentioned in this article: JNJ